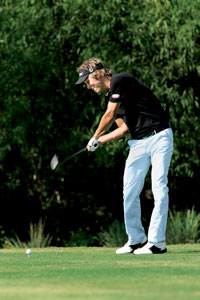 Sweden's golf program has produced a number of world-class players in recent years, including Annika Sorenstam, Henrik Stenson and Jesper Parnevik. One of the players you might be less familiar with, Fredrik Jacobson, is well on his way to completing his fourth consecutive year on the PGA Tour after spending six successful years on the European PGA Tour. Jacobson has already had top-10 finishes in big events like the Memorial Tournament and the EDS Byron Nelson Championship and has shown that his outstanding play on the greens can make him a threat on just about any course.

The Eyes Have It
Jacobson's eye line is parallel to the target line. This is a critical alignment to facilitate the club's correct path approaching impact. If the eyes point to the right of the target, the club will likely come excessively from the inside. If the eyes point to the left, the club will be excessively steep. Matching the eye line to the target line is a great way to get the club on the correct path.

On Plane
The right forearm and clubshaft are perfectly in-line before impact. This is the test for an on-plane delivery position. If the shaft is below the arm, the club is too flat, and if it's above the arm, it's too steep. When the shaft lines up correctly, the likelihood of solid contact increases significantly.

Regardless of whether the clubface was open or closed during the backswing, or if the left wrist was bowed or cupped at the top, it's the alignment of the two in the delivery position that really counts._Ê Jacobson's left wrist is flat, and the leading edge of the clubface is parallel to it. This square position is all that matters, and Jacobson does it perfectly.

Elbow Glued To The Hip

The correct sequence of motion beginning the downswing creates the proper tilt of the right side. This allows the right arm to bend, creating a powerful position while ensuring an on-plane attack. Keeping the right arm close to the hip encourages the body to drive the arms and club through impact, minimizing the role of the hands during contact.

Tippy Toes
There's no question that getting into the front of the shoes on the downswing will promote a more active lower body. While this is great for the right foot, it can be problematic if the weight moves excessively into the front of the left foot. This can block the proper release of the club and is something Jacobson should improve upon to produce more consistency.

Sequence
Jacobson's downswing is unfolding in the perfect order. His feet, knees and hips have begun the motion and are now more open to the target than his shoulders. This proper sequence of motion not only produces maximum power, but also creates tilt in the right side that gets the club attacking on plane.