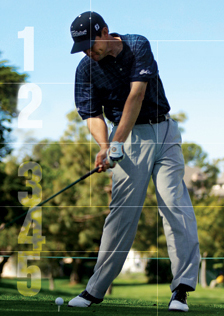 Davis Love III is that rare breed of golfer who enters every tournament with a great chance to win. One of the reasons for this is his prowess with the driver. Last year, Love averaged 299 yards off the tee and notched a Total Driving ranking (accuracy plus distance) of 26, which fueled four wins and paychecks totaling $6 million. With such length off the tee, hitting greens in regulation–the most important scoring indicator–becomes a less daunting task. Love has already posted a Top-30 GIR rank in '04. Pair that with a solid short game and it's easy to see why Love is such a formidable opponent. If you want to hit longer, straighter drives and set up easier approach shots and better birdie opportunities, mimic Love's impeccable driving technique–one of the best of all time.

1. Stay Behind
Davis Love is a tall player (6'3) who generates power with an upright swing and a wide, high arc. Love's swing is characterized by a smooth motion that explodes at impact, producing some of the longest hits in golf. At the moment in time captured here, Love's head is still behind the ball but remains in the middle of his shoulders to provide balance. Notice how his right shoulder is back (just inside his right foot) and lower than his left. This is a must for staying on plane.

2. Body Release
Note how Love retains the angle of his right elbow and wrist even though he has released the angle formed by his left arm and club. This means he can release the clubhead without fear of shutting the face. Holding this angle is often called the late hit, but there's nothing late about it–it's right on time. Remember, with Love's clubhead speed, even a slightly closed face can cause a very nasty hook.

3. Accuracy Line
Love's body is tilted in a position I call the long left leg, giving the impression that his left leg is a continuation of his spine. This is a common pre-impact position for skilled players and it comes from starting the downswing correctly. Love's move back toward the ball begins with a shift of weight to his left hip. In so doing, the hips move laterally out from under the head, creating the long left leg look.

4. The Big Picture
The signature move of Love's swing is the formation of the left wall. The wall assembles when the left hip, knee and ankle align to provide a resistance across which the clubhead slings. Like all great players, Love doesn't do a release, he has one, because he sets up his wall, and his arms and hands don't release until they reach it. Proof that the wall is in place? Check out how the left pant leg flutters–his leg stopped inside his left pant leg, but the fabric kept moving.

5. Stay Planted
Love's weight resides on the inside rim of his right foot, with his heel still pointing toward the ground and the right knee canted in toward the left. This assures that he has accomplished two prerequisites for solid

contact: 1) his weight has shifted to his left side without his right knee popping upward and outward (which would destroy his posture); and 2) his right hip has remained behind his right elbow, giving his arms an unobstructed route to the ball.

Senior Instruction Editor Dr. T.J. Tomasi is recognized as one of the Top 100 teachers in America.