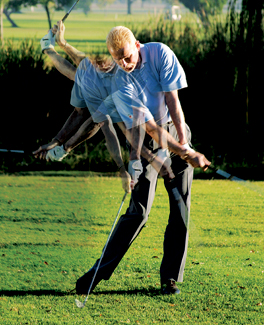 There’s only one time during the swing when both arms are straight, and that’s just after impact. It’s a key checkpoint that you can use to determine the quality of your swing, since fully extended arms following contact signify that your arms and body are in sync. Unfortunately, most golfers allow one arm to collapse at some point before impact, while others, usually of the high-handicap persuasion, suffer a severe case of the bends with both elbows splayed near the bottom of the swing.

A bent right elbow just after impact robs your swing of the explosive force generated by the straightening of one of the most powerful levers in the human body—the 90-degree angle formed at your right elbow during the backswing. Holding onto the right elbow bend, instead of releasing it, occurs when you overuse your upper body, especially your shoulders.

A bent left arm after impact stems from a flippy release, caused by overactive hands. Loss of direction is the result. Furthermore, when the left arm collapses, it forces a narrow swing arc, with the clubhead too close to the body. This is a tremendously weak position that indicates a major power leak.

The worst breach of swing mechanics occurs when both elbows are bent in the post-impact position. In this case, you lose distance and accuracy. If you’re a going low type of player, the chances are that the double-bend isn’t your problem, but even the good player is troubled from time to time by the single bend, so it’s a good idea to troubleshoot your swing if you’re losing distance or having accuracy problems. Skilled golfers build swings that have maximum width just after impact, where both arms are fully extended and the clubhead is as far away from the body as it can get. Any undue slowing or speeding up causes the linkages to rupture, so make sure to keep your body and arms moving at a constant rate. Remember, bursts lead to busts. 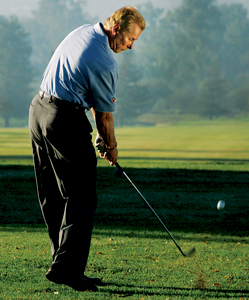 A good drill to develop the feel of proper extension past the ball is the Trail Hand-Off Drill. In this exercise, allow your trail hand (the right for right-handers) to come off the club just after impact, thereby ensuring two-arm extension. Make a smooth practice swing with a 3-wood or a driver so that you finish with only your target arm tethered to the club. Next, hit a few balls separating your trail hand as soon as you feel impact. Swing at half-speed until you’re comfortable, then let it rip. After a few swings, you’ll feel the after-impact extension that all good players have.

Summary
_Ê Just after impact is the only time in the golf swing when both arms are straight–it’s an indication that your clubhead is on a correct path under full release.
_Ê Hands and clubhead in front of belt buckle is the guideline.
_Ê The big mistake is to allow the hands to swing away from the body out toward the target line. The hands should move left of the target as should the butt of the club so, at impact, both arms are in front of the body and parallel to–not on–the target line.
_Ê Maximum width just after impact means that both arms are fully extended and the clubhead is as far away from the body as it can get.

PGA professional and Senior Instruction Editor Dr. T.J. Tomasi is the director of instruction at Lyman Orchards GC in Middlefield, Conn. Check out his entry in our Top 10 Best Swing Tips Ever.

3 thoughts on “Straight Arms After Impact”