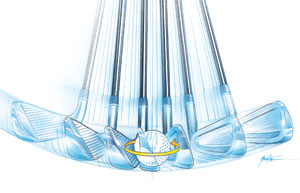 Believe it or not, the long-held belief that the clubface must be square through the hitting zone to hit straight shots is a myth. Over the past 10 years, I’ve measured the activity of the clubface during Tour players’ swings through the impact zone, and what I’ve learned is that not a single player holds the clubface square during the hitting area. Not one! In fact, these top-level players rotate the face counterclockwise around the shaft (for right-handed players) at about 30 degrees per foot of linear motion forward.

If your clubface is square when it first touches the ball, and you correctly allow the clubface to rotate six degrees counterclockwise, you’ll get a six-degree hook that starts left of the target and hooks further left. In contrast, if the club touches the ball with the face six degrees open, it will apply an initial six-degree slice rotation. This will be negated, however, by the six-degree hook rotation applied during the deformation phase. The result is sidespin of net zero and a straight shot.

If you strike the ball with the face anywhere in the three- to nine-degree open range, you’ll hit a perfectly acceptable golf shot. It should be reassuring to know that a six-degree variation at impact will produce decent results. In measuring Tour players’ face angles at impact, I found a five-degree variation, shot to shot.

Put these new concepts to the test the next time you visit the range. Address the ball with the face six to 10 degrees open, instead of square. Turn the shaft counterclockwise through the impact zone and observe the resulting ballflight. If the ball flies left, you turned the face too soon. If it goes right, you turned the face too late. Keep hitting shots and observing ballflight until you have a sense of the face hitting the ball at the right time with the proper angle. Once you find the right amount of rotation for your swing, hitting accurate shots will become a lot easier.