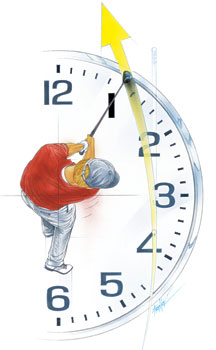 Many amateur golfers sacrifice power and distance because they become infatuated with swinging at the ball–not through it. They’re so intently focused on making solid contact that they become fixated with the point of impact.

Watch closely the next time you visit a driving range and you’ll see what I mean. The majority of amateurs lose speed at the bottom of the swing because they regard contact with the ball as an end to itself. They resort to making what I call a false finish–after losing the momentum of their swing at impact, they try to play catch up with body rotation and by having their knees touch.

Impact is an intermediate step to a golf swing; the completion point of the swing is a balanced followthrough with the body rotated toward the target. Anyone serious about trying to increase distance must train himself or herself to swing through the ball, not at it. As the popular saying goes, Let the ball get in the way.

That’s more than a golf adage, though. It’s sound advice. A solid swing should be one continuous motion, with the speed created on the backswing and enhanced by centrifugal force on the downswing finally reaching its peak immediately after impact, not at or before.

An important concept to understand when talking about increasing the speed of your swing is that distance is affected by an efficient transfer of energy, not solely from the creation of energy itself. This transfer of energy is similar to the motion of a whip. As you start the whip in motion, energy is created. This energy moves out from the handle (from which it was formed) out toward the tip, which soon moves much faster than did the handle when you started the whip in motion. The transfer of energy is so efficient and powerful that ultimately the tip breaks the sound barrier (which produces the crack.) The same thing happens in a fundamentally sound golf swing. Your hips begin the downswing and transfer energy to the shoulders, then to the hands and ultimately to the clubhead.

It makes sense, then, that the hips, shoulders, hands and clubhead reach their respective top speeds at different points in the downswing. Computer studies have proven that hip speed peaks out at about halfway through the downswing. Shoulder spin rate peaks out just as the clubhead reaches the impact zone. The hands achieve their maximum speed just prior to contact and the clubhead shortly thereafter. In other words, keep accelerating as the ball rockets off the clubface.