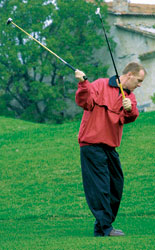 One of the main reasons why recreational golfers can't generate the power they'd like to is that they never fully get the club in their hands on-plane, especially the longer irons and, to an even greater extent, the driver. What recreational golfers need to understand is that the plane on which the club should travel changes from club to club–it's a path dictated by the lie angle of the iron or wood you wish to swing. As the lie angle decreases from the short irons to the driver, the desired swing plane becomes flatter.

I see many beginning golfers and those who struggle with a lack of power and a chronic slice swing their woods on a plane more fitting for a high-lofted iron. That is, they swing the club on too steep a plane. When you swing above the appropriate plane, you rob your motion of width, and creating as wide an arc as possible is the key to generating extra speed with your longer clubs. In addition, if you're too steep going back, you'll likely be too steep coming down–fore right!

To get a better sense of the difference between driver and wedge planes, try this drill. Hold your driver with your right hand and any wedge with your left. Notice how much flatter your driver shaft lies than that of your wedge. Now, imagine a plane of glass resting on both shafts–this describes the path on which you should take back either club. Go ahead and make a mock backswing with both clubs. If you've kept the clubs on their respective planes, you'll have moved your left arm above your right.

If you can move your driver on the right plane, and give your swing extra width, you'll be set to swing with more speed and hit with greater power.