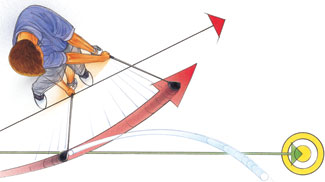 If you're one of the millions of golfers who battles a slice, odds are you compensate for the left-to-right ballflight by aiming to the left. However, no matter how far to the left you aim, the ball still slices to the right–sometimes worse than it did before. On the occasion you do hit it straight, well, it doesn't do you much good because you were aimed toward the trees or deep rough on the left. Hmm–you're doing what you think will fix the problem, but it's only making the problem worse.

If this sounds like you, fear no more. There's hope and a solution to this common slice problem. The key to ridding oneself of a slice is to understand two principles that apply to how you set up and address the ball. Much like a blueprint tells a contractor how to build an edifice, your setup dictates how you swing and in what direction you'll apply force to the golf ball. Secondly, despite what you might think, often the setup to avoid slicing is the one that might appear to be the most counterintuitive.

Let's take a closer look at the slice effects of a faulty setup.

Cause: Overcompensation
Most golfers who aim left aren't actually aiming left. They think they are by addressing the ball with an open stance and open shoulders. But in doing so, most slicers tend to forget to reposition the clubface angle and ball position. The result is an open body aiming left, a clubface square to the target and a ball position too far back in the stance. These swing ingredients are a gourmet recipe for a slice. Opening the stance and shoulders only makes things worse.

Effect: An Outside-In Swing Path
When the body is too open at address, no matter in what direction the clubface points, the club is set to travel on an outside-in swing path, which invariably results in a smothered hook or a pulled slice due to the left-to-right spin imparted on the golf ball. With open lines to the target, the club naturally gets stuck behind the body at the start of the downswing. Instinctively, your mind instructs the upper body to swing the club violently to the left. Fore, right! Unless you cultivate an in-out swing, you'll always slice or pull-hook the ball.

Solution: Aim Right!
If you want to get rid of slice spin for good, do what you think is most counterintuitive–aim to the right! Aiming right will encourage an inside-out swing. It also will force you to turn through the ball and, ultimately, help you get your stronger leg muscles more involved in your downswing. Be aware, however, that it's going to take a few setup adjustments and some time on the practice tee.

1. Strengthen your left hand (right for southpaws) and make sure that the clubface is facing the target and your body is square or slightly right of the target (place a club on the ground and along your toes to check this).
2. Play the ball no farther back than your left heel.
3. Concentrate on making a full turn through the ball and remember to turn your hands over and release your arms.

With practice, you'll soon see that aiming right reminds the body to make a full downswing turn and promotes the necessary inside-out swing path required to hit draws and hooks. Concentrate on a full turn of both the body and your forearms. With practice, that unwanted and frequent pull slice will disappear.