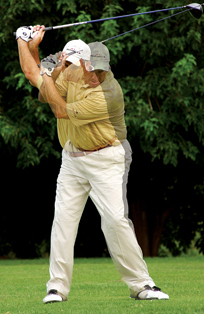 There are many different ways to generate extra power in the golf swing, and here’s one of the best: create maximum extension of the arms at the top.

Too often, amateurs allow their arms to drop or sag at the top of the backswing. As a result, they resemble comedian Steve Martin circa 1979–they look like they have a shaft going through their head. Typical results from this position are wild and crazy, like the comic himself.

At the top of the backswing, the arms and hands require serious separation from the head. Exactly how much separation depends on each individual and the length of his or her arms, but every golfer interested in going deep needs to create that gap. You can’t afford to accidentally stick your right thumb in your right ear.

Here’s a good drill to use on the practice tee to develop the necessary separation. Swing the club with only the left hand (the right for left-handers). Make a slight forward press to establish momentum for the takeaway, and then extend the left arm its full length as you take back the club. While performing this drill, you’ll invariably widen the arc of your swing, which ultimately translates into extra distance and power.

Notice with your left-arm-only swing that the right wrist hinges in response to the weight of the clubhead as the club passes the waist-high position. That, incidentally, is all the wrist hinge any golf swing requires; it happens naturally and, as such, doesn’t have to be a conscious thought or worry.

Have someone check your position at the top to see that the shaft points down the target line. More importantly, have him or her check the amount of separation between the hands (as well as the arms and shaft) and your head. Your position at the top should mimic that of a waiter carrying a tray of food in a crowded restaurant. The ability to carry that tray high and away from the head separates the real service pros from the others. Similarly, golfers who can swing the golf club to full extension at the top with exacting control generally are those who hit the biggest drives, shoot the lowest numbers and collect the most bets at the end of the day.