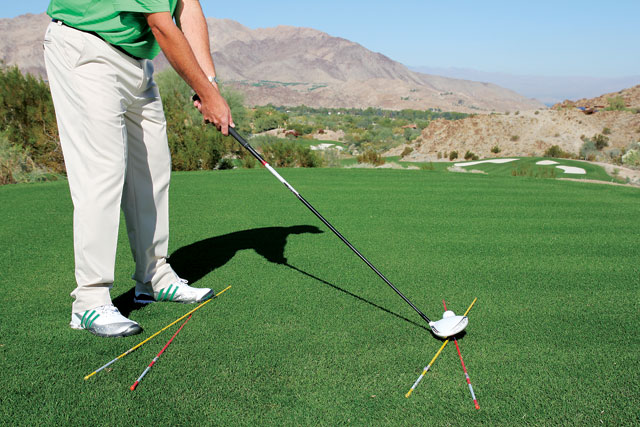 Wouldn't it be great if every golf hole was exactly the same? If that was the case, we could find a way to hit one type of shot and never worry about the need to curve the golf ball. But, well, that's not golf, and no two golf holes are ever exactly the same. Same goes for tee shots, since some golf holes require you to manipulate your ballflight if you want the optimal angle for your approach shot. In this case, I'm on a tee box that's ripe for a draw. Which if I do hit it right to left, I'll be in a prime landing area that sets up a really simple approach.

Only problem is, I don't play a draw. I like to fade it. So, what do I do to hit a draw in a pinch? I don't want to change the dynamics of my swing, so what gives? The easiest way to hit a quick draw is to understand a couple basic fundamentals. In this case, let's look at some alignment sticks.

The orange sticks represent a square setup position, which is generally how I'm used to playing golf. The orange sticks represent a clubface facing directly at my aim point in the fairway (right stick), while my feet are aligned parallel (or even slightly open) to the target line (left stick). At impact, I'd like my clubface to be square to the target line stick, which when combined with my slightly outside-in swing path produces the fade I usually play.

Now let's look at the yellow sticks, which are laid out to indicate in my mind what I need to do to hit a draw. First, I need to adjust my feet slightly to the right (left yellow stick). Second, the other yellow stick indicates that I need to adjust my swing path so I ensure it's from inside to outside the target line on the downswing. Now, here's the trick. I didn't really change anything in my stance, other than shift it a little to the right. My swing path is still the same, relative to my feet/body position. Same goes for ball position and so on. The only thing different is the clubface angle, which is still facing my target.

Most amateurs forget this last step. They align to the right, swing to right, and wonder why they still hit a fade or a blocked shot to the right. It's because the clubface wasn't square to the target at address.

That's really all there is to hitting a draw in a hurry, folks. Feeling as though you need to swing harder with the hands and rotate the clubface closed, or set up square to the target and loop your swing from the inside-out, are not the kinds of things you want to do to force a draw, especially if they're contrary to your natural swing. Instead, keep it simple. Align your body slightly to the right of your normal stance, but keep that clubface square to the target. From there, trust your setup and swing along your body line. You'll start hitting draws in no time.

One thought on “Quick Draw”