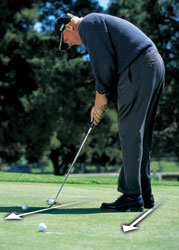 There's no quicker way to establish yourself as totally clueless on the greens–and to inspire confidence in your opponent–than to set up for a right-to-left putt, make a little pull stroke that sends the ball dead left, and watch the ball meander aimlessly on a path five or six inches below the cup, totally oblivious to the hole. Ditto the left-to-right breaker that you push well right of the hole. There's a reason they call this missing on the amateur side–these are the putts that haven't got a chance.

If you hit your putts to the high side of the hole, you'll make a much higher percentage. Hit the putt too high and–if you've hit the putt with the correct speed–it still has a chance to trickle in over the edge. Putts never fall in over the edge on the low side.

Here's a simple, yet extremely effective system, to hit more putts on the pro side of the hole–and to sink a higher percentage of them while you're at it.

Regardless of whether the putt you're faced with breaks right or left, you'll have the greatest opportunity for success if you keep the ball above the hole–otherwise known as the pro side. The theory behind this technique is that putts that drop below the hole have little or no chance of finding the bottom of the cup. Your ability to read greens aside, the best way to ensure that your putts never drop below the pro side is to make simple adjustments to your hand and ball position. For right-to-left putts, encourage an inside-square stroke by playing the ball back and your hands forward. For putts that break in the opposite direction, set up with the ball forward and your hands back. These adjustments will make it difficult to push the ball to the low side.

Right-To-Left-Breaking Putt
On a right-to-left-breaking putt, set up with the ball slightly back (about two ball widths) in your stance and with your hands ahead of the ball so that the shaft leans forward (below). These adjustments will encourage a stroke that comes to the ball on a slightly inside-to-square path. More importantly, it minimizes the likelihood of cutting across the ball and pulling it left–the low side–of the hole.

Left-To-Right-Breaking Putt
When you're facing a putt that breaks right, position the ball forward by one or two ball widths and keep your hands behind the ball so that the shaft tilts slightly away from the hole. From this position, it's next to impossible to push the putt offline. Instead, your putter will travel along a square-to-square or slightly out-to-in path, keeping your putts on the hole's high side.

Straight Putt
On a straight putt, focus on keeping the puttershaft in a perfectly vertical position at setup and impact. This will help you utilize the putter's loft and impart a true roll on the ball.