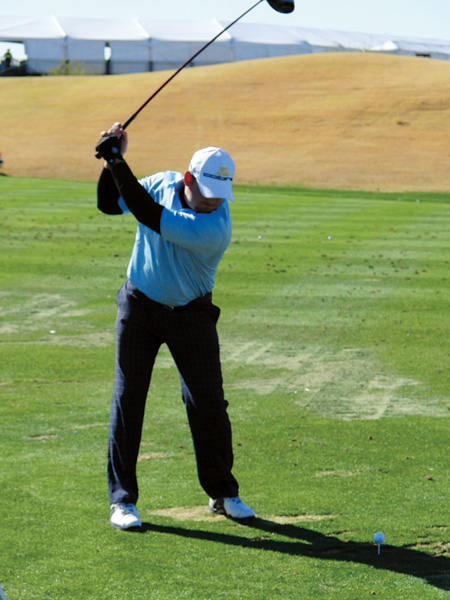 1. Top of backswing
Camilo Villegas and J.B. Holmes are two of the game's longest hitters. Jesper Parnevik is one of the longest iron players. What can you learn from them?

First, all three players demonstrate an efficient yet powerful body motion in their backswing. At address, golfers should flex forward from their hips, and maintain that angle throughout the backswing. Note how all three men turn their shoulders at a 90_¡ angle to their spine, beautifully maintaining their original spine angle.

Here, you'll notice that all three men have made full shoulder rotations, while maintaining a relatively short arm swing. It's amazing, really, that Camilo and J.B., two of the game's longest hitters, have the shortest arm swings but full shoulder turns. They also have relatively flat left wrists at the top, with the clubface matching the same 45_¡ angle to the horizon. (Most players who slice usually have a cupped left wrist with the clubface hanging straight down.)

2. Transition To Downswing
The transition into the downswing is one of the most crucial yet difficult areas of the swing. Here, you can see that all three men begin their downswing from the ground up. Their feet, knees and hips shift their weight to the forward foot. Their left knee increases in flex as they push their weight forward and downward into the ground. Their right foot and inner thigh also move forward and inward to accommodate this lateral movement. As the lower half initiates, the arms respond by dropping in close to the torso, while each man maintains his wrist hinge. Notice how all three players lower their arms in close to their body to set up a powerful inside path to the ball.

3. Impact
This position is the most important moment in the golf swing. Every good player achieves great alignment and body position at impact, and every poor player doesn't.

Note how each man's left wrist is flat and pointing at the target. This angle controls the clubface angle. Their right arms are bent and resting on their right hips, while their right wrists remain bent, stabilizing the delivery of the club, and connecting the club to the true power source: the hips, legs and core. Each man's eyes are focused intently on the back of the ball, seeing the hit clearly.

Note also how their shoulders are square, but tilted on the original 90_¡ angle to the spine, ensuring an online swing path. Their hips have cleared and are open, and 85 percent of their weight is on their forward foot, catapulting the shaft through the hitting area. Power and precision both are delivered at once.

What Are The Differences?
J.B. plays a fade, and Camilo usually plays a draw. Evidence of this is seen by ball position (J.B plays it more forward in his stance, while Camilo plays it farther back). Because more weight needs to move forward in the downswing (to allow the club to approach more from the inside), Camilo (in his transition) has more left knee flex and lateral hip slide, while J.B. has less hip slide and more turn. During the transition, Camilo's left arm is also on a more inward angle so the club approaches more from the inside, while J.B.'s is in line with the target.

At impact, J.B. has cleared his hips with less weight forward (his left leg straightens, and his left foot spins out) and has allowed his shaft to line up with his left arm. All these factors enable him to swing slightly across the ball and impart fade spin. Camilo, on the other hand, moves more weight forward, as seen by his larger left knee flex. The shaft doesn't line up with his left arm completely. All these are traits of an inside-out delivery, thus imparting draw spin on the ball.