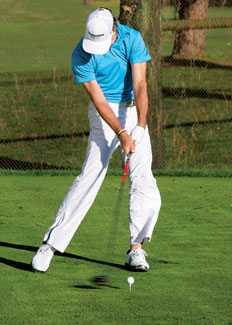 I often long for the days when Slammin’ Sammy Snead and Gene Sarazan played the game, a couple of great sticks with personalities just as bright as their games. Well, fortunately for golf fans, there’s a new kid on the block and he’s brought a unique backstory and stellar game (albeit with a modern flair). His name is Will MacKenzie, or Willie Mac, as the 2006 Reno-Tahoe victor is sometimes called.

But what interests me the most about Will is his swing, in particular a few key elements he shares with two legends of the game, Ben Hogan and Slammin’ Sammy himself. Take a look at the following pro positions, and you’ll see why Willie Mac is separating himself from the field.

1. Posture Perfect._Ê Will’s shaft angle at address is perpendicular to his spine angle. This relationship will be maintained throughout his swing.

2. Like Snead. Will’s body language is dead-on Snead. His left arm matches his shoulders, forming a One-Plane swing. His open clubface is a product of his weak left hand._Ê_Ê

3. Spine Angle. A little loss in spin angle at the transition, I bet Will would like to be a little more bent over here.

4. Boom Time! Will’s arms and chest have worked hard to the left. Notice how his right arm matches his shoulder tilt, forming a mirror image of his backswing arm plane.

5. Wind Up. Notice the logo on the back of his shirt? That indicates a huge turn. He’s maintained a lot of space between his legs to build up positive resistance.

6. Hogan-esque. Players who swing on flatter planes need to stay more on top of the ball with very little weight or body shift to the right. He’s a dead ringer for Ben Hogan here.