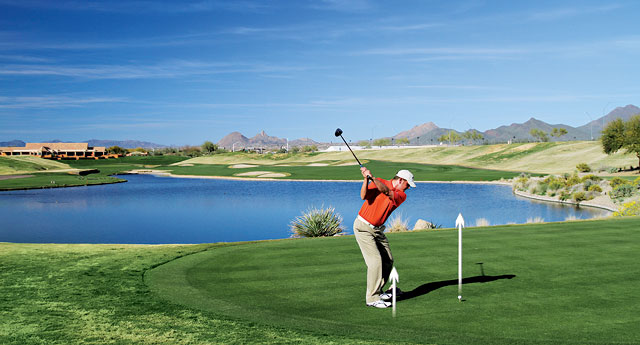 Every week, TV audiences are mesmerized by PGA Tour pros. It's easy to understand why. It seems like every few minutes they hit some amazing shot, drain a long curling putt or stripe a drive down the center of the fairway. "If only I could do that," golfers at home think.

Of course, to play like a Tour pro demands years of sacrifice and dedication. But that doesn't mean the average golfer can't hit Tour-quality shots. In fact–and this is one of the things I like most about the game–over the course of a round, I guarantee that every golfer executes at least one shot that comes off just like a pro's.

In this article, I'm going to show you how to do that on a more consistent basis. Read on and get Tour-tough.

AIM AWAY FROM THE TROUBLE
Whenever you tee off on a hole with a hazard or an OB on either side of the fairway, always tee the ball up on the side the trouble is on.

Consider the shot I'm faced with here. I'm standing on the 18th tee at TPC Scottsdale, where a large lake extends down the fairway's left side. I'm teeing it up as far left on the tee box as possible so I can aim right and away from the trouble. (Trust me, I've seen a lot of players snap-hook their drives into that hazard during the Waste Management Phoenix Open, and it's not a fun way to finish your round.)

By teeing up on the left side, I actually can aim so far right that my back practically faces the lake. (In truth, I can barely see it when I look down the fairway.) By eliminating trouble (or ignoring it), I'm free to make a more aggressive swing. That's exactly what the best Tour players do.

HOVER YOUR PRACTICE SWINGS
Roughly 85 percent of all amateurs slice their driver, but very few Tour players do (or, if they do, they do it on purpose). Why? Simple. Pros swing the club on a flatter plane and square the clubface at impact.

Slicing can happen for two reasons: a steep downswing that leads to an outside-in swing and/or an open face at impact.

To fight the slice, try rehearsing your swing on a flatter-than-normal swing plane by hovering the clubhead about a foot off the ground and making swings like you see here.

This creates more arm rotation through the impact zone and generates more clubface rotation. Do this enough, and the face will square at impact and allow for a straighter drive.

TURN YOUR BACK TO THE TARGET
Here's Woody Austin teeing off on the 13th hole at Riviera Country Club during a practice round at the Northern Trust Open. He has selected a driver and made a full turn in his backswing. In fact, it's so full, his back now faces down the fairway. Woody is in his late 40s, and you can be sure he stays limber to torque up like that. When you combine a big shoulder turn with quiet hips, as he's doing here, you create a lot of coil. Unleashing that is the first big step to hitting long drives.

DEVELOP AND REPEAT A CONSISTENT PRESHOT ROUTINE
When the game's best golfers get ready to play a shot, a few things happen the same way, time and again.

1.) To establish a target line from their ball to their target, they always stand behind the ball. In most cases, they pick out an intermediate target (a spot, blade of grass, etc.) three to five feet in front of the ball and align their clubface and body lines to it.

2.) They assemble their grip while behind the ball and then walk in to address the ball from the side. The grip assembly from behind the ball is important so you don't have to fidget while over the ball. Like the pros, always aim the clubface at the intermediate target and then align your feet accordingly.

3.) They breathe, retain a concentrated focus on their primary target and make an aggressive swing.


MEASURE TWICE, CUT ONCE
In construction, the saying goes, Measure twice, cut once. That is, before you cut a piece of wood, make sure it's the right length. The same goes for golf. Take this series of photos of Padraig Harrington and his caddie, Ronan Flood. As a team, they assess the lie they have, determine the distance and then select a club based on these factors. Note how in the last photo, Harrington is locked in on the target? After he has assessed all the elements, he hones in on one thing before pulling the trigger: the target.

CONTROL YOUR PITCH SHOT TRAJECTORY
To control how high their pitch shots fly (and, hence, how far the ball rolls after it hits the green), I tell my students to alter how much their shafts lean at address. Hey, that's what most Tour pros do, too.

As a rule, the shaft should always point to the center of your body. This requires you to shift left for the low toss and right for the high toss. Your ball position is dictated by how you "stand to the handle," as it were. (The more you lean to the left, the farther back in your stance it will be. The more you lean to the right, the farther ahead the ball will be.)
Keep your lower body passive during the backswing, and assemble your hands with a predominantly arm swing. Return the shaft

position to the identical spot you started with at setup. "Thud" the ground and really go at it with your lower body. The result should be three different trajectories that produce three different "rollouts."

This is a great shot to play when you're about 20 yards away from your desired landing spot on the green.

PRACTICE WITH A PURPOSE
Charlie Wi and Tour pros like him don't just play around during their practice rounds. He practices with a purpose. Here he is chipping on Riviera Country Club's 12th green. But he's not chipping to the hole, he's chipping to where the hole will be cut on one of the tournament days. Lots of pros take a hole-sized rubber Frisbee that they can place anywhere on the green and putt or chip to. Just because the pin is cut in a specific position doesn't mean that that's the only hole you should play to.

DIVIDE THE GREEN INTO THIRDS
Here's a maxim I always tell my students: Putt when you can putt, chip when you can't putt, and pitch when you can't chip. In short, the closer your ball is to the ground, the easier it is to control. All Tour pros know this.

First, however, you have to establish a landing spot. If there's no trap or hazard in the way, it should be roughly two paces onto the green, regardless of where the pin is. Once you establish this spot, determine which club you should hit and at what trajectory. The higher the shot, the less the ball will roll; the lower the shot, the more it'll roll. 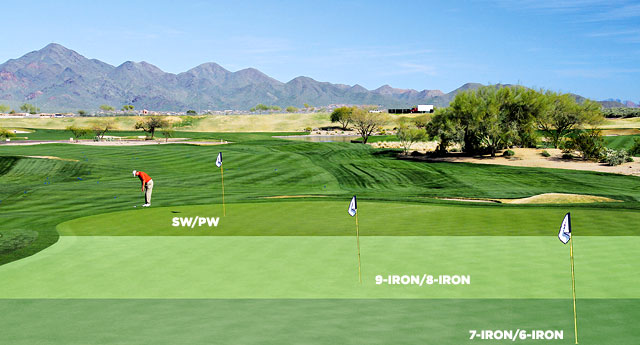 PRACTICE LIKE A PRO, TOO!
If you want to better your game like the pros do, why not practice like they do? The TOURAcademy, located at various locations throughout the U.S. (including here at the TPC of Scottsdale), offers a tee-to-green, PGA Tour-influenced, immersive learning experience for players of all types. (No, you don't have to be a member of the PGA Tour to experience what the TOURAcademy has to offer.) Programs include total game improvement programs from the ground up, one-on-one instruction, group lessons, multi-day golf schools and more. Better yet, you can customize your experience based on how intense you want your lessons to be. Whether you're looking for a light primer on the fundamentals or a total swing overhaul, the TOURAcademy delivers some of the finest golf learning experiences in the entire country. To learn more, visit www.pgatourexperiences.com.

MAKE A REAL-TIME PRACTICE STROKE
A few years ago, I had dinner with one of the game's best putters, Loren Roberts, the so-called "Boss of the Moss."
Inevitably, the conversation turned to putting. I asked him what he thinks about when he stands over a putt. He answered with only one word: "Speed."

These real-time practice strokes program your brain to get a sense of the right speed and will help eliminate all those
unwanted 3-putts.

John Stahlschmidt, PGA, is the head instructor at the TOURAcademy in Scottsdale, Arizona. For more information, visit touracademy.com.