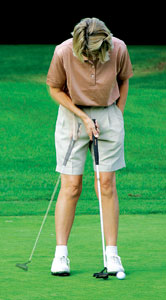 It sounds crazy, but one-armed putting can improve even the worst putting strokes. Putting with your rear arm (the right arm for a right-handed golfer) helps instill a feeling of acceleration through the putt, which is absolutely critical for creating a smooth, end-over-end roll. Rear-arm putting accomplishes this largely due to the weight of the putter–with two hands, it's easy to manipulate the club and make jabbing or decelerating strokes. But with one hand on the club, you don't have the coordination or strength to manipulate the putter. You'll need to rock your shoulders and control the stroke with your body, not your arm, two hallmarks of a fundamentally solid stroke.

Rear-armed putting also promotes a longer followthrough, which generally improves accuracy and consistency. Think about it. When you putt with both hands, it's pretty easy to stop the club short, just past the ball. But if you try to stroke it with just one arm, you'll have to let the club go down the target line because it's hard to stop the momentum of the putterhead with only one hand.

The third benefit of one-armed putting is better distance control and touch. Believe it or not, losing the front hand puts all the feel in your back or dominant hand, which is where speed control comes from.

Finally, one-armed putting creates confidence. When your consistency, distance control and accuracy increase, so will your belief that you can make anything you look at.

As you practice with this technique, you'll find your sensitivity increases to the point that when you put your other hand back on the club, you won't notice it's there.

Debbie Steinbach competed on the LPGA Tour for 11 years, and is now a top-50 instructor. Debbie teaches at The Palms Golf Club in La Quinta, Calif. (www.venusgolf.com).