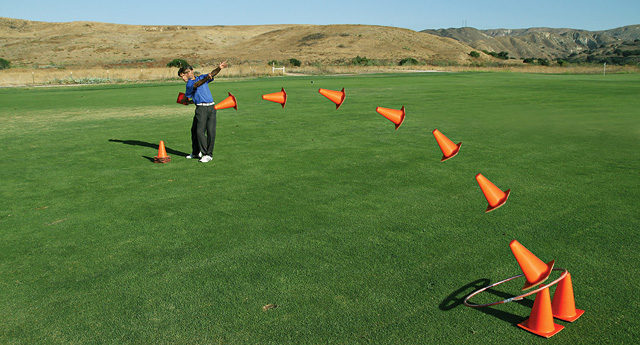 Sometimes, even the best players in the world need to refresh their fundamentals. In fact, for some, the fundamentals are the only things they work on come time to keep their swings in check. In the following pages, I want to share with you 10 of my favorite tips and drills to help you not only keep your fundamentals in check, but shoot lower scores right away.

One of the common swing mistakes I see from my students is an overactive upper body combined with a stalled lower body. This tends to happen because many golfers feel as though they need to hit at the ball, instead of swing through it. This type of motion creates all sorts of bad shots because the body is usually out of sync and out of position at impact.

The fix for golfers who struggle with "hitting at" the ball is to try the cone-toss drill. Now, it's not as though the road cone serves a distinct purpose, other than being a nice weight and a lot of fun to throw. You could use playground balls, basketballs, or medicine balls to achieve the same thing. To do the drill, situate a target about 10-15 yards away (in my case it's a Hula-Hoop) and then toss your cones in an underhand fashion and try to land them at your target.

This drill helps you get the feeling of both swinging and throwing through to a target–a feeling you should mimic in the golf swing. The goal with every toss is to finish with the hips and shoulders in line–a good indicator that the hips and shoulders have worked together to swing the object through to a target. After a few tries with your cones, hit five golf balls right away to transfer this motion directly into your golf swing.

I've seen this one many times! Many amateurs set up near their golf ball, make a great, smooth practice swing with no ball, then set up to the ball without fully adjusting their body to the golf ball. This means they're usually standing a little farther away than they naturally should be, making it darn near impossible to make the same swing as your practice swing.

The key is to let go of the fear that comes from standing too close to the golf ball. What I like to do is, on the practice tee, make a practice swing aside a golf ball, and do so until you make a nice small divot. Then, without moving your feet, roll a golf ball over and put it just behind the divot. This will help you feel the exact position your ball should be, and don't be surprised if, at first, it feels a little close–it's not. Do this and get a feel for what it's like to get the golf ball in the way of your practice swing, and you'll start hitting more solid golf shots.

Here's a little secret the pros know, that you probably don't. The tempo for your swing, whether it's a short-iron shot from the fairway or a tee shot with a driver, should always stay the same. The common problem I see is that with longer irons and with woods, many golfers feel as though they need to swing harder from the top of the backswing, which as you'd guess, causes all kinds of dismal shots.

A great drill for working on improving your tempo, with your irons in particular, is to do the short-to-long drill. Line up five balls in a row. Begin with a smooth chip swing and increase the length of each swing until the final ball, which will be your full swing. Keep doing this until your tempo feels exactly the same for each ball or until the full swing seems to take longer than the short swing. It will take some practice, and a lot of patience, but this drill will work wonders for improving your tempo. And to take it a step further, try counting "1, 2, 3" as you swing at various lengths, timing yourself so each swing starts at 1 and ends on 3.

When a typical golfer tries to hit the ball farther, he generally tries harder, swings quicker from the top, and completely loses his "sense" of where the club is. The result is a mis-hit shot, which never travels very far.

A great fix for this problem is the "Back! Hit! Stop!" drill.

Start with making five practice swings, verbally saying "Back!" at the top of your swing, "Hit!" at impact and "Stop!" at the end of the finish. Do this until your vocalizations are right on time with the key points. Then, do the same exercise with five balls lined up. Keep practicing until you can get your voice to do the "Back! Hit! Stop!" at the key moments of the swing. As you hit balls, the key is to pay special attention to when your voice comes out. If it's earlier than it should be, this means you aren't focusing on the club, you're anticipating something else and/or trying to muscle or force your shots. This is what's killing your power! Once you can be with the club all the way through, then your swing will be in sync and you'll get much more out of your shots. It's amazing what a little vocalization can do.

5. SPEED UP YOUR FOLLOWTHROUGH

Again, when golfers go for more distance, they try to swing harder at the very beginning of the forwardswing. This leads to overacceleration of the club too early, and maximum clubhead speed isn't attained at the right spot, which is through impact. Even if you manage to square the face to the ball, and get your body in the right position, if your max speed is before the ball and not after, you're not getting the maximum power out of your swing.

If you watch the best swings in the world, the followthrough, especially with a longer club, takes much less time than the downswing. Learn how to wait on the club until it's about halfway down on the downswing before really trying to let it loose. You should get the feeling that the clubhead is travelling the fastest AFTER the impact point. You can also practice with a driver, holding the clubhead end. Then, swing the shaft until you start hearing the whoosh of the shaft later in the downswing. 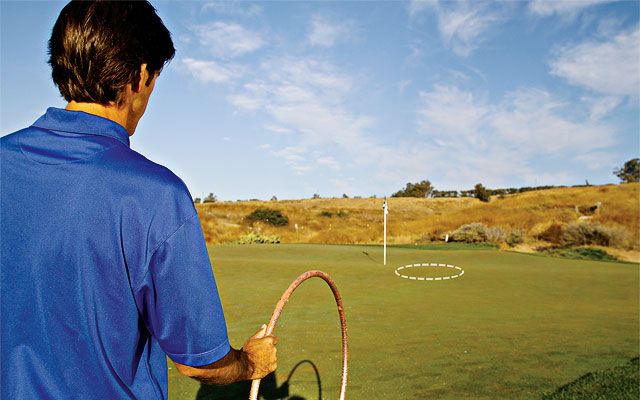 Many golfers make chipping and pitching much more difficult because they worry too much about what the ball might do as it rolls to the hole. This becomes a distraction that clutters the mind and results in poor contact and a general lack of distance control.

Instead, the most important thing to focus on is the landing area on a chip and/or pitch since that's really the only thing you have total control over. Select a chipping location, visualize the shot and where you would need to land the ball, then go place your hoop where the landing area is. Then give yourself 10 balls to accomplish the following tasks: Get one ball to land in the hoop and get one ball to come to rest within three (advanced) to 10 (beginner) feet of the hole, depending on your skill level. The goal would be to finish the task in as few balls as possible, while learning how your chips and pitches roll or check up. Some golfers put a little more backspin on their shots, and some hit it lower and play for more roll. The key in using the hoop is to not only get in the habit of not aiming directly at the hole, but also see how your shots react once they do hit the ground. Do this, and your distance and direction will improve tremendously with your chips and pitch shots.

Too much tension in hands and arms leads to flipping at the ball instead of creating a solid chipping stroke. When this happens, you see a lot of flubbed, fat and thin chips.

A great way to loosen the tension in the hands is to try the club-toss drill. Grab a couple wedges and make room to toss each wedge a few yards ahead of you. As you make a chipping motion, allow the club to come loose through impact. Do this about 10 to 15 times. Then, add a ball to the motion. If your club gets tossed dramatically to the left, then you're using too much tension and trying to hit at the ball or scoop it. If the club starts to go fairly straight, then you're starting to feel what it's like to have Tour professional hands and control around the greens.

8. EYES ON THE TARGET

If you struggle with hitting chips the right distance, it's probably because your eyes and your golf swing don't see and feel the same thing. Also, you're likely hitting at the ball again, instead of letting your body and club swing through the ball and toward the target.

To alleviate this problem, practice chipping with your eyes on the target instead of the ball. Before trying with the ball, do about 10 to 15 practice strokes with your eyes on your target and allow the club to naturally brush the grass. See if you notice that your legs and torso begin to shift weight and rotate with the motion of the club. Then set up to a ball and practice without your eyes on the ball–keep them on the target. In a short time, you'll get a better feeling and visual for not only making the right swing length, but also hitting through the ball, not at it.

Ask any great putter, and he'll tell you that speed is the most critical variable when it comes to putting. Your speed can change the way the ball breaks, so if you don't have the right speed, your directional control will suffer, too. So, here's what I like to do to help improve my students' speed control.

In this exercise, simply find a fairly flat and straight putt on the putting green. Start at about 10 feet from the hole and put a towel or glove in the cup. Putt with your eyes closed and, before you open your eyes to see where the ball went, see how accurately you can guess where the ball ended up relative to the hole–or even if you made it! As you practice this and get more accurate at your guesses, you'll be developing the essential skills for great distance control–a better sense of the target and feel for your stroke. Once you head out onto the course, use this exercise during your round to make more putts!

It's not uncommon to want to look up and see what happens to the ball after you stroke a putt. Even the best players in the world sometimes do this. Only thing is, when you think too much about where the ball goes after you stroke it, you'll probably come out of position and make an awkward, off-line stroke.

If this sounds like you, do the "Back! Hit! Stop!" drill in putting. Challenge yourself to get your voice right on the points of the transition, impact and all the way to when the putter stops. If you can keep your focus until the putter stops moving, then the ball will already be in the hole. And even if it doesn't go in, it won't be because you distracted yourself.

One thought on “My Favorite Tips & Drills”