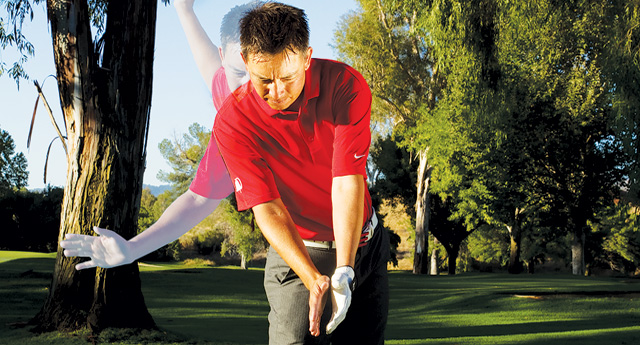 Just because the golf season is near a close, there's still plenty of work to do if you want to keep your swing fresh and up to par for the next golf season. That doesn't necessarily mean you have to grind out in the cold all winter (Arizona and Palm Springs are great places to be in January, by the way), but with a handful of quick tips and drills that I show here, staying in top form this off-season ought to be a lot easier and more fun. And for those of you blessed with the time and resources to play golf all year long, let these next few pages serve as a blueprint for playing your best golf now, and into the next playing season.

CLAP YOUR HANDS
One of my favorite drills for perfecting the impact position is to do what I call the clap your hands drill. What this drill does is help you get a sense of what it means to stack your left side at impact and make solid contact into the golf ball.

To get started, address the ball as you normally would, only don't use a club this time. From here, go ahead and simulate a big backswing, but when you do it, keep your left arm in the same position from start to finish, which ought to be pointing at the golf ball.

Finish the simulated backswing, then on the forwardswing, let your right arm come down and through and actually clap your left hand. When this happens, your body should be situated just as mine is in the photo, with your left arm stacked over your left leg, the hips open and the shoulders square to the target.

If you practice this drill often enough, you'll not only ingrain the proper impact sensation, but also prevent your shoulders from spinning out of position and taking your eyes off the strike with the ball.

PUSH IT AWAY
Hitting solid golf shots requires you to make sure you do two things correctly: Swing with a full extension of the arms and make a fluid, steady rotation of the body through impact. If you can master those two key fundamentals, all the other fundamentals such as grip, posture and path will become a lot easier to master. Among my favorite drills to do just that is the push drill.

Simple as can be, the push drill can do wonders for your ballstriking. To accomplish this, set up over a golf ball in your impact position, with the hips open and the shoulders square to the target. Then, fling the ball toward the target with a smooth release of your right side, and make sure your arms are extending through to a full finish.

As you do this, try to actually lift the ball with a mid- to high-lofted iron and fling the ball up and away toward the target. Don't feel as though your direction and how far the ball goes matters; rather, practice making a fuller extension of the arms at impact, while at the same time, rotating your hips open through the swing.

Once you do this drill a few times, you'll ingrain a better impact position and start hitting better shots. Just remember, this isn't a drill to get you to hold the clubface square through the shot. It's about the arms extending while they and your body are rotating. In the photo to the left, I've hit a solid golf shot with a perfectly square face, but what the photo doesn't show is that I'm also in the process of closing that clubface through impact as my body rotates through the shot.

ONE-HANDED BUNKER DRILL
Hitting crisp bunker shots is actually a lot easier than you may think. In fact, I often see my students overcomplicate their bunker shots, thus making them more difficult, and in many cases, they struggle with simply removing the ball from the sand.

In most short-game shots, you usually want to remain fairly quiet with the right hand, but not so in the sand. Learning to spank the sand with this right-hand-only drill will give you the proper feeling of aggressively releasing the right wrist through the shot, which gives the shot more height and spin. This also gives you the proper sensation of taking a shallow cut of sand, with the bounce of the club or trailing edge. Most people try to play sand shots as they would play normal short-game shots, with the hands forward through the shot. This makes the club dig into the sand and produces only low shots with no spin.

So go ahead and hit a few bunker shots with just your right hand. I'll bet you'll see better results in no time.

MASTER THE LOOP
Despite what you may have been told, the golf swing is not a straight-back-and-straight-down-the-line motion. Because you swing in a circle, you have to swing the club on one side of the target line on both the backswing and in the followthrough. Ideally, the goal is to swing slightly inside the target line on the backswing, and again inside the line on the forwardswing. But that's not always the easiest thing to do. Instead, you can actually loop your swing to better help you square the clubface at impact. Only thing is, most amateurs loop their swing in the opposite way from how they should. They tend to take the club back too far to the inside, which then leads to an over-the-top downswing and all sorts of ugly shots.

BY LOOPING IT RIGHT
To practice taking the club back correctly, try what I'm doing here. Situate one ball a couple feet back and just inside the target line (which is the orange stick you see). As you take the club back, swing the club over, not inside, that back ball. As you do this, you'll not only develop a wider swing arc, but also be more prone to start your downswing with a rotation and weight shift of the body, as opposed to driving your upper body first and coming over the top and hitting pull hooks, big slices and so on. Try this drill any time you feel as though you're coming over the top.

TRIPLE-HIT DRIL
Most people buy into the myth that consistency in golf is gained by being still. That's why you hear so many people preaching keep your head down, eye on the ball, don't look up until the ball is long gone. But consistent golf is more about learning the proper motion, with good rhythm–something that everyone does with their practice swing, but rarely on their ball swing.

As you'd guess, however, having a smooth, effortless swing actually takes quite a bit of effort. The body has to swing in a fluid sequence with con-stant motion. To practice developing a smoother rhythm and tempo (not to mention more power), try the triple-hit drill. It's simple: Set down three balls in a row. Then, place a middle iron in front (not behind) the first ball. From this position, swing up to the finish. From there, take the club all the way back and up to a half or three-quarter swing, and then swing down into the golf ball.

After you hit the first ball, you should be in the same position in which you started. Then, in a continuous motion, step closer to the next ball and repeat until you've hit all three golf balls.

With this drill, the goal isn't to hit all three balls perfectly, or to do it as fast you can. Rather, what you want to do is groove a more rhythmic swing and a more balanced tempo.

GRIP HIGH FOR LOOSE CHIPS
When hitting chip shots around the green, the worst thing you can do is have a grip that's too tense and rigid. Instead, try this: Grip the club with the butt end of the grip in the palm of your upper (left) hand. Make a normal grip with your lower hand, and let the club swing in a natural, pendulum-like motion. By gripping in the palm, you'll get a better sense of activating the wrists in the shot, which despite what you may have learned, isn't a bad thing when it comes to chipping. The key is to use your wrists properly, and to not forget to rotate the body through the shot. In the lower photos of the above sequence, you can see that although my wrists remained supple, my left arm and the shaft are in perfect alignment with one another through impact and into the finish.

I couldn't have done this without some body rotation and smooth acceleration through the hit.

SLIDE THE COIN
Most mis-hit putts are missed because the putter is lifted up too soon, and the putterhead strikes the ball on the top half of the ball. To stop this once and for all, take a coin (nickels work best) and practice sliding it across the green, carpet or even on a hard floor. By doing this, you're forcing yourself to keep the putterhead level with the golf ball, but at the same time, you're just missing the ground as you make your stroke. Give it a try, and I'll bet you miss the coin on your first and maybe your second try. But in no time, you'll be draining more short and long putts.

HOLD THE COIN
Want another coin tip? This time, place a coin (I'm using a dime this time because it's the smallest) on the flange of your putter. Then, go ahead and rehearse a series of putting strokes without dropping the coin. Because it's there, you're going to be much more inclined to swing in a smoother, more controlled and more level fashion.

Once you get really good at practice strokes using this technique, try hitting a few actual putts, as well. In addition, this will help you smoothen the transition your putter makes from backswing to forwardswing and keep those jabby, yippy strokes at bay.

SEE THE COIN
The last great drill using a coin is to practice a few putts with the ball positioned directly on top of a coin (again, a dime is good here, but so is a small ball marker). Why, you ask? The goal here is to keep the head and eyes fixated over one spot. By doing that, you're more likely to swing the putter in the intended direction. If your head moves, it's likely your path will too. So stick with this drill, and hit a few five-foot putts with the ball on top of your coin, and make sure you see the coin after you make contact with the ball. Keep that head steady and see the coin, and I know you'll soon see better results and make more putts!