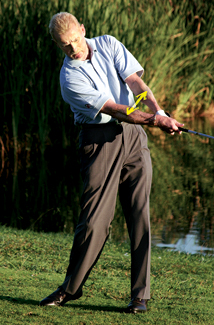 Good golfers give the impression that their forearms suddenly cross over through impact, but the swing is so fast that it fools the eye. What little forearm roll there is begins in the backswing with a gentle clockwise rotation of both forearms, a motion that reverses itself as the club swings back to the golf ball. The guiding concept is that your clubface is squared at impact by the proper rotation of your body as a whole and not by any independent roll of your arms and hands. To take your scores to the lowest levels, this independent rotation must be avoided; otherwise, you may fall prey to two major swing flaws: under-rotating and over-rotating.

Under-rotating produces one of the most annoying shots in golf–the balloon slice. This high, powder-puff shot robs you of distance and typically sails to points unplayable on your right. The problem is that your forearms under-rotate, creating a knuckles-up position at impact where the back of the target hand faces the sky, a position that produces an open, slice-inducing clubface.

To develop the right amount of forearm roll, and keep the balloon slice and rip hook at bay, match up your circles. 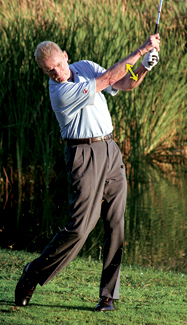 Matching Your Circles
Imagine two one-inch circles, one in the center of your right forearm and one in the center of your left. If both of your forearms are positioned correctly at address, the circles point at one another. When your circles correctly oppose one another, an observer looking down the target line from behind shouldn’t see your front forearm since your back forearm is blocking the view.

Throughout the swing, your forearms shouldn’t touch, but the circles should stay looking at each other. There’s a certain amount of forearm roll both away from and through the ball, but it’s a natural motion that occurs in response to the momentum of the clubhead.
_Ê
The benchmark of proper forearm management is found at impact, where the elbows are the same width as they were at address and the circles face each other. To test this, use your belt to secure your arms at address. Place it just above your elbows and draw it snug, then take some practice swings. It should remain in place from start to finish with no undue pressure on the belt.

Forearm Release Drill
Hitting the ball with your feet together will teach you how to blend forearm and body rotation. Simply allow your body to mimic the rotation of your forearms.

Tee the ball and hit 7-irons with your legs so close together that the insides of your ankles touch. You’re only trying to hit the ball about 50 yards with a slight draw so there’s no need for a big swing. Concentrate on releasing the club with a soft but constant rotation during the downswing. Don’t hold your body stiff, but simply let its turn be paced by your arm swing. When you do it correctly, you’ll feel as if your arms are swinging past the midline of your body with everything–shoulders, forearms, hips, clubface–rotating at the same rate.

The most reliable type of forearm release is a non-manipulative motion that occurs as a result of syncing your arms and body. You don’t try to do a forearm release, rather, you arrange for it to happen.

Summary
_Ê Watching good players gives the impression that their forearms suddenly cross over through impact, but the forearm roll takes place gradually throughout the swing.
_Ê The proper rotation of your body as well as the soft yet inexorable roll of your forearms square the clubface at impact.
_Ê When you minimize forearm roll on the backswing, you get a slice unless you over-rotate your forearms coming down. It’s the opposite for a hook.
_Ê If your shots go one way and then another, it’s probably due to too inconsistent forearm roll.
_Ê When you try to roll your forearms, it’s too easily overdone.
_Ê If your face is open at top, forearm rotation will begin sooner with more extension of the right arm. If the face is closed, forearm rotation is postponed until just before impact.
_Ê At impact, your forearms should be the same distance apart as they were at address, with the circles facing each other.