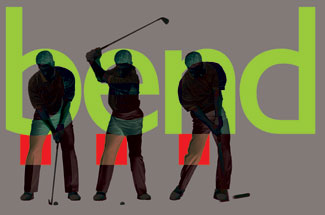 There are many important facets to a good golf swing, but maintaining the bend in the right knee is one that simply can't be overlooked. When a student comes to me with a common complaint (slicing, poor ballstriking or a general lack of consistency), I always take a close look at his or her body angles, and make certain that their posture and knee position are constant throughout the swing. If the student is having problems with posture or knee position, it's not worth spending a lot of time working on other aspects of the swing. Solid results just can't be achieved without correcting these problems first.
_Ê_Ê
Typically, golfers who straighten the right knee suffer from a sliding or swaying of the hips in the backswing.

Of course, these problems, along with the reverse pivot, are extremely common faults for recreational golfers, so it's no surprise that a straightening of the right knee is also very common. The only way to prevent right-knee straightening is to keep the lower body centered and acting as a base of support. This way, the upper body will have the freedom to get behind the ball without affecting the angle or bend of the right leg.

It's important to understand that trying to restrict the movement of the right leg while making your regular backswing won't remedy the problem. The ideal situation is one in which the swing works without mechanics that affect the bend of the right knee.

The key to achieving this effortless backswing is keeping the spine angle you establish at address a constant. The spine angle and right-knee bend are closely related, and it's necessary to maintain both angles for a solid golf swing.

My favorite drill for developing a solid backswing is the two-club drill. To practice the drill, you need two extra clubs and the help of a friend.

First, assume your address position, and have your friend stand behind you, placing the head of one club against your left shoulder and the head of the other club against your left hip. Then, take a backswing. If your hip moves off the club, then you've swayed, and your right leg and knee have straightened to some degree. Instead, you want the left shoulder to move off the club to the inside of the right foot, and the left hip to rotate while staying in contact with the club. This will ensure that you've maintained your original spine angle throughout the backswing, while also helping retain the original angle of the right knee.

Continue practicing this drill until the proper position feels natural. It might take some time, but if you can learn to maintain your right-knee flex and spine angle throughout the swing, you'll be well on your way to developing a more solid, consistent golf game.
_Ê_Ê
Losin' It
Losing your right-knee flex during the backswing usually results from a straightening of the right leg, a move that also generates a reverse-pivot. From this position, the likelihood of producing a slice increases dramatically.

No!
When performing the two-club drill, it's important to turn correctly while maintaining your spine angle. If your left hip moves off the club on your backswing, you've swayed or tilted your spine–disaster.

Yes!
A solid backswing turn, one in which the right knee retains its flex and the spine angle doesn't change, is evidenced in the two-club drill–at the top, the left hip is still in contact with the club while the shoulder has moved off the other.

Veteran instructor Carl Rabito is a two-time ECC PGA Teacher of the Year. His Rabito Golf Schools are based at the Diamond Players Club in Orlando, Fla.

One thought on “Maintain The Bend”