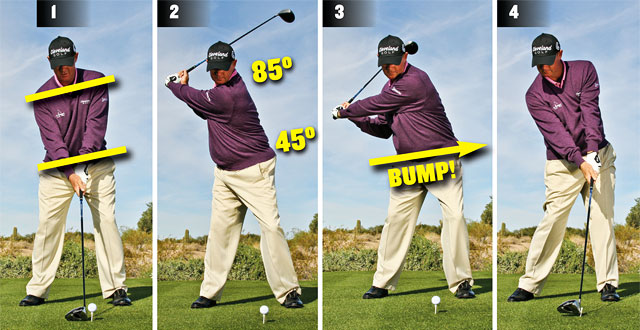 One of the most important keys to hitting the ball both straight and far is keeping the sequencing of your swing synced properly. If your arms are doing one thing while your body is doing another, syncing your swing becomes a real nightmare. You might hit a good shot once in a while, but any chance at being a consistent ballstriker when your arms and body aren't cooperating with each other is practically impossible. Let's look at how to keep your arms and body connected through the downswing, as well as how to sequence the right moves in the right order.

As you can see in photo #1, my hips and shoulders are parallel to one another and my spine has some tilt at address. By aligning my shoulders on the same tilt, it makes it a lot easier for my upper and lower body to work together, and it helps me naturally shift my weight and make a big body turn on the backswing. By doing that, as you can see in photo #2, my hips have turned as far as they can, while my shoulders have turned even further. Now, folks, this is where many golfers get it wrong. The hips and shoulders turn away from the ball at the same time. It's just that the shoulders turn a little more than the hips do. Golfers who struggle usually turn their shoulders and then their hips. Or, some even turn their hips, then their shoulders. Both instances route the club way to the inside on the backswing, which as you would guess, leads to the club getting stuck and swinging from over the top on the downswing.

Photo #3 shows the correct sequence of motion. The key is to avoid spinning the hip out as you start the downswing. When you hear of players like Tiger or Rory who have "fast hips," it doesn't necessarily mean they rotate their hips open at an incredible speed. No, if anything, it has more to do with how fast they "bump" their hips forward and rotate slightly open as the arms drop downward.

In photo #4, I'm at the moment of truth. You can see my hips have cleared, but not so much so that my shoulders are unable to be aligned parallel to the left of the target at impact. Had I spun my hips open too far and too soon, I'd have to swing extra-hard with the upper body and force my hands to move a lot faster than they should. Doing that is yet another reason why many golfers slice the ball so much. They spin their hips way open through the downswing, causing the hands to take over, and try to manipulate the clubhead at impact. In most cases, the hands can't catch up, leading to a wide-open clubface at impact.

The correct thing to do is to remember that the hips do, in fact, open on the downswing, but it's the "bump" that's more important. Allow the left hip to bump forward and up as you swing down with the arms. The hips should rotate, but don't force it to happen too soon. Remember the bump in the hips, and you'll quickly see how much easier it is to sync your swing and start hitting straighter shots.

2 thoughts on “Long Game: Get Connected”