Editor’s Note: This feature on Paige Mackenzie was updated February 21, 2019 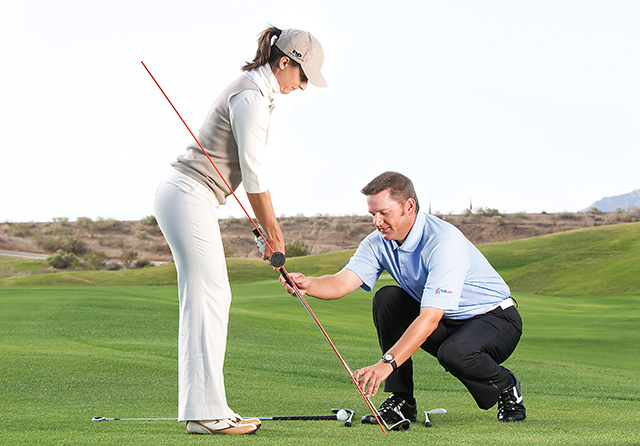 As an instructor, I have had the privilege to work with Paige Mackenzie since the winter of 2008. Paige is a tremendous athlete who owns a stellar amateur and college record. The first time I watched Paige hit golf balls, I was impressed by the amount of clubhead speed she possessed and admired her wonderful overall golf swing. But I could tell she wanted to be more consistent, so I went to work with her right away.

Once I filmed her golf swing and broke it down, there were a few areas in which I felt she could improve. The pictures ahead will break down three key positions we changed during the winter of 2008 and the spring of 2009. Paige went from 102nd in greens in regulation in 2008 to 19th in 2009, allowing her to enjoy her best year to date on the LPGA Tour. Paige also is enjoying a great 2011 so far, going three for three in cuts made and a T12 finish (as of April).

Paige, not unlike many golfers, had the tendency to swing her clubhead too low and inside. This mistake leads the clubhead and the shaft off its original shaft plane, making it more difficult to hit straight, consistent shots. Generally speaking, a low and inside takeaway will make the shaft swing on too steep of a plane at the top of the backswing, making it essential to reroute the club during the downswing. Paige could do it because she’s a world-class athlete and could time herself back into position. But for most amateurs, if they take the club back too far inside, they’re likely to come over the top of the ball on the downswing. There might have been players who have had success making this move (to the inside), but no one will ever convince me that this is the best or most efficient way to swing a golf club. It’s just too hard to get back on the right plane.

To fix Paige’s tendency to pull the club low and to the inside, I’ve paid special attention to the clubhead position midway on the backswing. If the grip end of the shaft is pointing parallel left of the target, I know she’s on the right track and en route to swinging the club back on the proper plane. This is a great place for just about anyone to check his or her swing. If you’re out of position this early in your swing, no doubt the rest of your swing will be out of position, as well. Also, check out the difference in face angle in these two photos. At left, the face is more open, evident by the toe pointing up. In the right photo, the face is angled more downward. But, that doesn’t mean it’s a closed clubface. If anything, the clubface is more square to the swing plane (even though it appears closed relative to the ground). So give this a try the next time you work on your mechanics. Just remember, a slightly closed clubface (relative to the ground) might help you swing more on plane.

In the photo at left, you’ll see the old position at the top of the backswing. During this part of her swing, the shaft is in a crossed-the-line scenario. If you draw a line from the clubhead down the shaft and through the butt end of the grip, the shaft will point behind Paige’s body. This happened as a direct result of her old takeaway, which

On my off weeks, I’m usually at the golf course six days a week. I spent a lot of time on these mechanics and on my short game this off season. It’s already made a huge difference so far this year.

again, was too low and to the inside. Many argue that the takeaway isn’t important, but I promise you that it sets up the top part of the backswing. This position was off the original shaft plane, and Paige had to reroute the club during the downswing to refind the correct plane. Again, she could do it because of her high skill level, but for the average player, getting him or her to reroute the club back on plane from a position like this is a tall order. It usually leads to smother hooks and big slices.

Take a look at the new top-of-backswing position. If you draw a line from the head down the shaft through the butt end of the grip, the shaft now points at the inside of the golf ball–a perfect position that doesn’t disrupt the correct geometry of the shaft plane. Getting to this point in the swing is critical, since it initiates a series of chain reactions on the downswing. And put it this way: If you start off on the wrong track, you have little to no chance of hitting a good shot. When you’re on the right plane though, the transition into the downswing is a lot easier. Simply drop the arms and turn the body, two things Paige does exceptionally well.

You can tell a lot from this part of any player’s golf swing. The old position shows a closed or overrotated clubface. This is an indication that Paige had to manipulate the clubface through impact to hit the ball at her desired target. Not only is the face closed, but to get here, she had to flip her right hand post-impact. When the right hand

moves in this fashion, the clubhead isn’t able to move down properly to the correct low point of the swing, located four inches left of the center of the stance. This overactive clubface led to inconsistencies with Paige’s ballflight, which ultimately led to missing greens both right and left.

As you take a look at the new postimpact position, you’ll notice the right hand is still in a bent position. This allows the clubhead to move down properly through impact to the low point. This also created a much more passive clubface through impact, allowing Paige to have much more consistency with her ballflight, ultimately allowing her to become one of the best ballstrikers on the LPGA Tour.

When I’m not having a good ballstriking day, I want to eliminate the left side of the course, so I usually open up my stance a little and hit fades.

The orange rod worked great to clean up Paige’s impact conditions. If you insert the rod in the grip, it’s impossible for the right hand to flip too early after impact. This allows the hands to stay in front of the clubhead longer through impact, thus creating a more passive clubface. Using this tool, Paige was able to have a much more predictable ballflight, resulting in more GIRs, too.

It’s important to note that when performing this impact drill, you need to make little golf swings. The clubhead shouldn’t get any higher than your right or left hip. Any higher, the rod will impede your golf swing.

The first step in improving Paige’s golf swing was to correct the initial takeaway. I placed an orange rod slightly inside her target line and on the same angle as her shaft plane at address. If Paige takes the club away too far to the inside, she’ll strike the rod. After many practice sessions with this training aid, Paige learned the correct feel necessary to take the club back on plane. This not only fixed her takeaway, but also made it possible to keep the shaft on plane at the top of the backswing. From here, which is perfect by the way, there’s no reroute necessary during the downswing, resulting in more consistency.

My tendency is to get fast and long in my golf swing, especially when I’m playing well, or when I’m nervous. My swing thought when I get under pressure is to take it back slow and only 3/4 of the way. If I’m really nervous, I chew gum to help stay relaxed.

Once Paige mastered her impact zone and started swinging on the correct swing plane, it was important for her to aim properly and play the ball in the correct position. This three-club hitting station allowed her to do that very thing.

Ball position: Once Paige corrected her swing plane and created better impact conditions, she was ready to master the correct ball positions. As I stated earlier, the low point of the golf swing should be roughly four inches left of center. Every club in our bag except our driver should be struck as the clubhead is moving down. You should play your short irons (wedges, 9-iron, 8-iron) in the center. Play one ball left of center with the 7-, 6- or 5-iron. Play two balls left of center with long irons, hybrids and fairway woods; and finally play three balls left of center with the driver. Again, positioning the driver this far forward makes it possible to strike the ball on a slightly ascending blow. Notice that Paige has both feet at an equal distance from the perpendicular club. This guarantees the correct ball position for the club in hand.

Swing: The beauty of a hitting station is that you can actually hit golf balls from inside it and monitor your progress. With iron and wedge shots, Paige can check to make sure she’s playing the ball in the correct position (just before the swing bottoms out) and also work on improving her alignment at the same time.

When I practice, I try to change targets and change shots so I never feel stuck and I always stay focused.

There’s no doubt golf is a hard game. If there are errors in your golf swing, you won’t reach the level of consistency you desire, even if you happen to play at the highest level, as Paige does. Evidence shows these changes have made Paige a better overall ballstriker, allowing her to reduce her scoring average over the past three seasons. In the sequence below, you can see how fluid and effortless her swing looks. But don’t be fooled. There’s a lot of power and precision behind it that comes primarily from her ability to hinge the club properly. If you look at the middle row of photos in particular, check out how well she holds the hinge in her wrists from the top of her swing all the way down to just before impact. That’s real power, folks. Also, her excellent body turn through the shot is what allows her to make such a long extension of the arms through the hit. This too is an awesome position to try to emulate.

John Stahlschmidt, PGA, is the head instructor at the TOUR Academy located at the TPC Scottsdale in Arizona. For more information, and to book a lesson, visit touracademy.com.