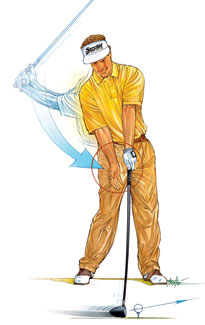 When you want to get some extra distance out of your drives, it's natural to think that your right or dominant hand (for right-handed golfers) should supply the power. In reality, however, maximum power is a result of a left-hand lead.

When you think about overpowering the ball with your right hand, that arm becomes involved in the motion too early. Two things will happen and both are bad. First, when you pull hard from the top with your right hand, your arms will separate too much from your body. This creates an outside-to-in swing path and, inevitably, the result is a weak slice. Second, tugging hard with your right side causes you to lose the angle created between your hands and the shaft. You'll have no lag during the downswing, and clubhead speed through impact will be reduced rather than increased.

The next time you watch the Re/Max World Long Drive competition, notice how long into the downswing the big hitters maintain the angle of their hands and the shaft. It's held until just before impact, then released with speeds of up to 160 mph. This is impossible if your right hand is released at the beginning of the downswing. indeed, the world's longest hitters lead with the left.

The best way to feel the proper start of the downswing is to imagine that your right arm is being pulled by the left for as long as possible. A great drill to get this feeling is to release your right hand from the club at the start of your downswing and swing only with your left. With practice, this drill will ultimately lead to more power and control.

Mike Gorton, the 1987 National Long Drive champion, was a three-time finalist in the competition throughout the '90s. In 2000, he won the Senior Division. He is a member of the World Long Driving Hall of Fame.