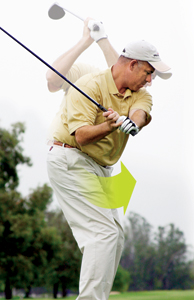 Golfers who possess the ability to hammer 300-yard drives like clockwork often talk about the importance of firing the right side through impact. That’s all well and good, but it’s also somewhat misleading. The right side doesn’t serve as an initiator in the downswing; it’s a reactor. The right side of the body doesn’t fire as such; it responds to a proper sequence of motion initiated by the left side.

A pronounced weight shift from the inside of the right leg to the heel of the left foot is the move that initiates a powerful downswing. Accompanying the weight shift forward is an unwinding of the left hip and left shoulder, which opens the upper body to the target line before the club enters the impact area.

Without a forceful, dramatic clearing of the left side, the right side has nowhere to go during the downswing except over the top, which promotes either pull hooks or slices. Both those mis-hits diminish maximum distance.

When I go to the practice range, I like to spend a few minutes rehearsing ideal positions at impact: my lead (left) hip is open maybe 35 to 40 degrees to the target line, my lead (left) shoulder is open 20 to 25 degrees, and my head is behind the ball. When I’m at home, I try to rehearse those same positions using an impact bag, which provides resistance and serves to create muscle memory.

From the ideal impact position, created by leading with the left side, I can launch my longest drives, the ones that travel 350 yards and more. Yes, the right side explodes down the line during those optimum swings; but again, that’s only a consequence, not a trigger.

Think of the boxing adage: Lead with the left, cross with the right. It’s the weight shift to the left (leading) side that allows a boxer to snap off a jab before following in behind it with the haymaker._Ê

Golfers will be able to deliver knockout punches of their own by making sure the left side takes the lead in the downswing, creating the momentum and energy–and space–needed to deliver the clubhead through the hitting zone with maximum speed and power.