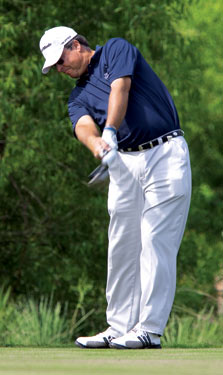 At 46 years of age, you’d think Tour veteran Kenny Perry would be struggling to keep up with today’s young guns. After all, the closer players get to the Champions Tour, the shorter they’re supposed to hit it. Not Perry. As of this year’s PLAYERS Championship, the Kentuckian is ranked 21st in Driving Distance, placing him six spots (and 1.1 yards) ahead of Tiger Woods. Of course, technology can get some of the credit, but Perry wouldn’t be able to routinely hit 300-yard bombs off the tee without a well-greased swing. After a disappointing 2006 in which he underwent arthroscopic surgery on his right knee, it’s only a matter of time until the sneaky-long Perry returns to top form.

THE PLANE, THE PLANE
While his ballflight may be one-dimensional, his mechanics are spot on. Perry’s shoulders, arms and club are now traveling back up the inclined plane. It’s easy to visualize this plane by drawing a line through his shoulders that’s parallel to a line drawn through his elbows.

DISCUS THROW
A key element to Perry’s prodigious length off the tee is the action of his right arm through the hitting zone. It’s fully extended with the hand in a position similar to the release used when throwing a discus. This is a great visual for hitting a powerful draw.

BENT LEFT WRIST
While most players on Tour have their left wrist flat at this point in the swing, it wouldn’t work for Perry because his left-hand grip is in a very strong position at address. Flattening the wrist through the release would close the face dramatically and exaggerate his already strong, right-to-left ballflight.

RIGHT-SIDE TILT
The scrunching of his right side on the downswing enables the clubhead to attack the ball from the inside. This is critical for Perry, as he needs to start the ball right of the target to allow for his patented draw. This tilt is illustrated by the steeper angle of his shoulders compared to his hips.

FLAT-FOOTED
Perry’s feet remain flat on the ground well past impact. This unusual aspect of his swing is critical, as it allows his arms and club to swing out away from his body. Activating his feet and knees during impact would be counterproductive as it would take his arms back inside after impact, instead of outside.

With a well-greased swing and top-notch equipment, Kenny Perry regularly bombs it 290 yards off the tee. He plays the TaylorMade r7 Superquad. www.taylormadegolf.com_Ê