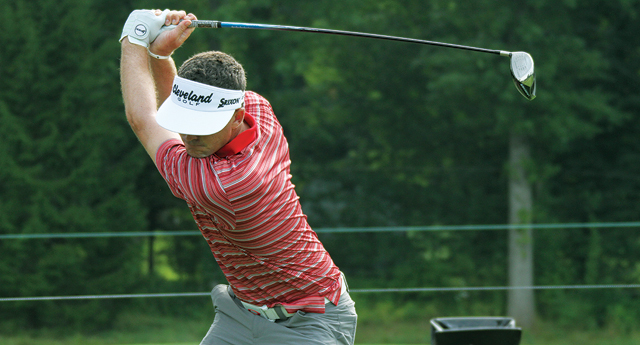 In his rookie year on Tour, Keegan Bradley has established himself as a player who has the potential to have a great career. His victory at the HP Byron Nelson Championship was a great win, but even bigger was his victory at the PGA Championship. He played fantastic all week and showed enormous heart and composure over the final three holes and subsequent playoff to nab his first major. He's almost a guaranteed shoe-in for Rookie of the Year.

To win twice in a year–especially a major at the Atlanta Athletic Club–he has to be a good driver of the ball. And Keegan's Total Driving rank confirms that. He ranks in the top 15 of the statistic that measures a player's driving distance and accuracy. Although a hot putter can make up for a lot in this game, it's certainly easier to play good golf when you're playing your second shot close to the green and in the fairway. Let's take a look at a couple photos of his driver swing and see how he does it.

1. FIRST OFF, notice how Keegan does a great job of keeping his lower body quiet in his backswing. He's maintaining his knee flex, and there's no hint of any leg slide or tilt, because his legs act as the base to allow his upper body to pivot. This is a great thing for all of us to do: Keep the lower body quiet as you make your backswing.

2. SEE KEEGAN'S belt buckle? It's pretty much facing straight ahead. He has very little hip turn in his backswing. Also notice the stripes on the back of his shirt. He has made a huge shoulder turn without turning his hips. He's really winding up his upper body on the backswing. You can also see how he keeps his chin up so his left shoulder has room to pivot. His head and upper body have shifted a little to the right or behind the ball. All this makes for a powerful backswing pivot.

3. FINALLY, although Kee-gan has made a huge turn and looks very powerful at the top of his swing, he has retained control of the golf club. Some powerful players (John Daly comes to mind) let the clubshaft get a little out of control at the top, but not Keegan. His clubshaft is slightly past parallel at the top, and the clubface is in a square position. It's much easier to hit it straight with a controlled clubshaft and face than with a clubshaft that's way past parallel or is closed or open. Well done!

1. LET'S LOOK again at Keegan's belt buckle. In this photo, you can see how he has turned his hips on his downswing and finishes with his belt buckle pointing down the fairway. Keegan has done a great job using his lower body in the swing. Based on his finish position, there's no sign of excessive lower-body slide or tilt.

2. ALTHOUGH Keegan's upper body looked like it was over his right side on the backswing, he does a great job of making a powerful upper-body pivot on the downswing into his finish. Notice how his upper body is now directly over his lower body. He's neither hung back, nor is his upper body leaning or lurching out in front of his lower body. This indicates that his body is working very well throughout the swing.

3. FINALLY, IT LOOKS as if Keegan has great balance and control as he works his way into the finish position. His body looks relaxed here, which tells me that the sequence of his swing is very good. The club and his body are working together efficiently. I also like the position of the club in this photo. He has allowed the club to fully release around his body into a controlled position at finish.

Steve Dahlby is the Director of Instruction at Forest Highlands Golf Club in Flagstaff, Ariz. He also can be found at The Golf Club Scottsdale and Phoenix Country Club in the winter. He's the current coach of Sean O'Hair and has worked with a number of touring professionals. Steve can be reached at [email protected]