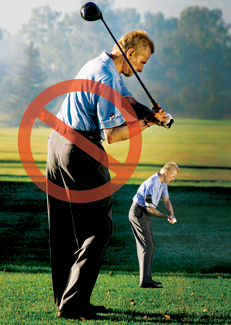 The three components for proper hip movement–a critical component of a fundamentally solid downswing–are weight shift, a slight lateral slide and hip whip (the explosive rotation just before impact that generates power). Good players know how to mix these components in the proper proportion to achieve both maximum power and outstanding accuracy. A lot of golfers, however, including some better players, are susceptible to two common hip movement mistakes: sliding laterally past the ball without enough rotation and spinning the hips too early without a proper weight transfer. Both of these mistakes cause power leaks as well as a loss of accuracy.

Knowing the truth about what constitutes correct hip action, however, can hurt you if you're not careful. In the half a second it takes to make a downswing, there's no time for separating out a lateral move from a rotational move. Consciously trying to perform three major actions–a shift, a slide and then a turn–all in sequence is asking for trouble._Ê

A Shortcut To Perfect Hip Action
To achieve proper hip action, simply take your setup and, in slow motion, swing into impact and pose. Then, take a club and lay it across your hips–it should point at a 45-degree angle (most poor golfers create only a 10-degree hip angle at impact). This 45-degree impact angle is critical, and you can get there correctly by simply making your hips shuttle diagonally to the 45-degree position–a shortcut I call oblique left for righties, or oblique right for lefties. The shortcut works because of the way the body coils in the backswing. Studies show that at the top of the swing, the hips should have rotated 45 degrees, and from this position, all you have to do is simply move over to the impact position, and the shift, the slide and the pivot will take care of themselves. 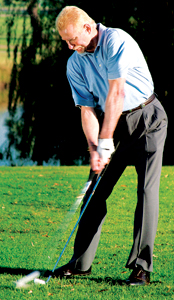 Unlock Your Hips
In a good downswing, there's a hip switch, where the weight transfers from the rear hip to the front hip, setting it up as the rotational center for the release. This can only occur if you unlock the hips at address so that your abdomen is retracted upward and inward, causing your backside to protrude so it acts as a counterweight to keep you in balance. Maintaining your address posture while you swing prevents your lower spine from thrusting toward the ball and ruining your hip whip.

Hips Are Made For Turning
Your hips are encased in a casket of tissue that keep them firmly in place. Due to the tight wrap of tissue, your hip joint has a restricted range of motion. Basically, the hips are designed to rotate rather than slide, although there's some leeway built in that allows a small amount of sideways slide, so long as the lower spine contributes. To take advantage of the whipping power of the hips in the golf swing, the spine must never move toward the ball, since that ruins the ability of the hips to rotate–the key element in generating power.

On Line And On Time
Here's a drill that will keep your shuttle on line and on time. Put the ball on a tee and assume your address position with two clubs–a 6- and a 7-iron. Lay the butt end of the 6-iron against your right hip, just inside your hip line. The head of the club should rest on the ground inside your back foot. Hit a shot with the 7-iron, keeping your right hip back as you start down. Since the hip is supposed to slide before it rotates, the club should stay propped up. If the hip spins prematurely, the 6-iron will fall to the ground.

PGA professional and Senior Instruction Editor Dr. T.J. Tomasi is the director of instruction at Lyman Orchards GC in Middlefield, Conn., and is a member of the GT Teaching Professional Network.

One thought on “Hip Work”