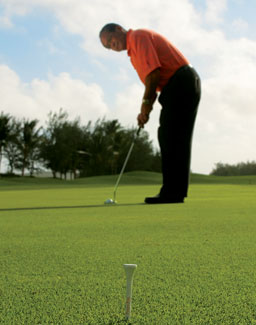 To be a great putter, you have to have sound fundamentals. This requires a steady putting stroke that regularly sends the ball rolling in the desired direction. You also ought to have a clear idea of what direction you should roll the ball–not only in the first few feet, but also during the entire distance of the putt. To do this effectively, you need to know how the green breaks by looking at two components of the putt: speed and direction. Some instructors argue that speed is the most important factor in putting because it dictates direction–that is, more speed equals less break, less speed equals more break. No matter how you feel about it, I say that if you aren’t aiming in the right direction, no matter how well you gauge the speed of a putt, you’ll rarely hear the jangle of the ball bouncing into the cup. Frankly, I’d be willing to bet most amateurs miss on the lower side of the cup as opposed to the higher side (often called the pro side of the cup), which is why amateurs tend to have putts that lip out and better players have putts that lip in. When you miss on the low side, the ball will always break away from the cup, often leaving you with a testy putt to save par.

To help get your direction to coincide with proper speed, here’s a tip that’s especially helpful on tricky, downhill-breaking putts. First, find a mid-length putt on the practice green with plenty of break. With the help of a playing partner, putt a few balls, and have your partner mark the apex of the break, aka, the spot on the green where the ball begins to break toward the hole. With a tee, have your partner mark the exact apex spot and then see to it you return to your original stance where you putt from. Now that you know where the apex of the break is located, concentrate on putting the ball to the hole, as long as the ball goes around the tee on the higher side of the apex. Continue doing this until you can get a clear idea of how much speed and what direction it takes to cross the apex and then roll toward the hole.

By practicing this kind of drill, you’ll likely find yourself either making more putts or at least missing putts on the so-called pro side of the cup. It also aids you in determining on what side of the cup the ball is going to roll in, helping you to concentrate more on putting to a specific spot and then allowing gravity to handle the rest. Try and remember that putts on the high side of the hole always break toward the hole, and putts below the hole always break away from the hole. Think: Never up, never in!

Craig Sasada, PGA, is Director of Golf at the beautiful Poipu Bay Golf Resort on the island of Kauai, Hawaii. For more on the resort, as well as all of Kauai, visit kauaidiscovery.com and poipubay.com.