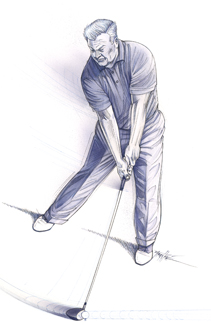 On September 4, 2004, the golf world lost a true, if not mysterious, legend. His name was Moe Norman, a shy, introverted man mostly known for his unorthodox swing. Standing wide at address with his arms stretched away from his body, his club some 12 inches behind the ball, Norman's swing was unconventional. It defied all modern teaching. Yet this reticent man held more than 40 course records, recorded 17 holes-in-one and won 24 tournaments. Vijay Singh called him the best golfer he had ever known, and Tiger Woods stated, Only two players have ever truly owned their swings—Moe Norman and Ben Hogan.

For most of his life, however, Norman lived in golf obscurity until 1995 when he was inducted into the Canadian Golf Hall of Fame.

Maybe even more amazing than his incredible ability was the way Norman became so great. With no formalized instruction whatsoever, he taught himself the simplest possible way to hit a ball on the ground with a stick. Before he died, I spent 10 years learning from Norman. Today, I conduct clinics and golf schools across the United States, bridging the gap between Norman's swing feelings and modern swing mechanics. The most important thing I learned from Moe is that the golf swing is simple; you can employ less moving parts. In order to do this, you must be willing to take a new look at the fundamentals of the golf swing. Once you see the genius mechanics behind the swing of Moe Norman, it might change your game forever.

In the next few issues of Golf Tips Magazine, I'll uncover the truth behind the swing of the best golfer the world never knew. With an open mind and a dedication to truly improve your game, you'll learn that the secrets to becoming a great ballstriker didn't end with the passing of Moe Norman.