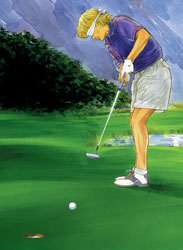 Golfers tend to get worked up about putting. They make it into a far more complex exercise than it has to be, which is why I often jokingly compare putting to performing brain surgery. No doubt about it, we put unnecessary pressure on ourselves as we stand over that little white ball and whisper a prayer before pulling the trigger.

Some players become anxious about having to look away from the target and down at the ball to make the stroke. That worry causes them to lift their heads too soon, sometimes even before impact, ruining the putt. Others focus too intently on mechanics, resulting in a tension that turns their stroke into something more like a jab.

An effective way to cure both problems is to practice putting with your eyes shut. Address the ball as you normally would, shut your eyes and make a few practice strokes. You'll notice that your anxiety will be relieved and you'll feel calmer right away. Additionally, your head and body won't move as you swing. That's because with your visual sense temporarily shut down, there's no reason to lift up and look for the ball. You'll also notice that with your sight blocked, your sense of feel will be enhanced, almost magically transforming your stroke into a free, relaxed motion. This heightened sense of feel will show up dramatically in your distance control.
_Ê
I've known players who have so perfected putting with their eyes shut that they do it in competition. If you can't make that leap, at least try closing your eyes when you make your practice stroke, then step up and hit the ball with that same relaxed motion.

Instruction Editor Debbie Steinbach played on the LPGA Tour for 12 years. She currently teaches at The Reserve in Indian Wells, Calif.