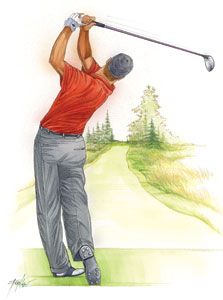 Most power tips I share with readers of Golf Tips_¨ have to do with the physical components of generating speed and power in the golf swing. For this issue, the power tip is a mental one.

What I refer to as bringing your power to the tee is more of a frame of mind than a matter of swing mechanics or technique. To hit your longest and straightest drives, you must be mentally geared up to unleash your potential power. This holds true whether you're playing a $2 Nassau with your buddies or competing in the finals of the RE/MAX World Long Drive Championship.

You can't go deep if you're filled with fear or anxiety about the outcome of the shot. You can't hold on to the club through impact, instead of releasing it down the target line. You can't try to steer the ball, instead of allowing it to work toward the target. And you can't come to a tight driving hole and start staring at the OB stakes on the right or the water on left, instead of narrowing your focus to an intended landing spot.

I've listened to experts like Jackie Burke Jr. and Jim McLean discuss the topic of being a little reckless with the driver, and I agree with their thoughts. Golfers can't allow fear or anxiety to dictate a shot. Nor can they become overanalytical during the golf swing. They have to just let things happen. They have to trust themselves and then allow their athletic instincts to take over from there.

As the saying goes, let the big dog hunt; don't try to hold him back with a leash. That often can be more of a mental challenge than a physical one.

Two-time National Long Drive champion Art Sellinger is a member of the Pinnacle Distance Team. Copies of Sellinger's Power Guarantee training system are available at (817) 329-8262 or by visiting www.artoflongdriving.com.