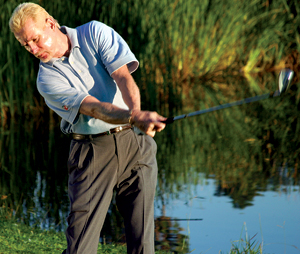 You hear it all the time, especially during golf telecasts: Look how still Freddy keeps his head, or Jack has made a career out of keeping his head still. The trouble is, when you put the videotape in slow motion, the heads of good players do move. In fact, they must in order to accommodate our anatomy. When you keep your head still, it hangs over your front shoulder at the top of the swing, like a turkey peeking over a log. A riveted head won’t accommodate a full shoulder turn and, more often than not, causes a reverse weight shift, with your weight stranded on your left side (right for lefties), just the opposite of where it should be.

In a good backswing, the head swivels away from the target as it floats at the top of the spine. During the forwardswing, the head retraces its steps–yet remains between the shoulders–as it swivels toward the target. The goal is to keep your head centered on the top of your spine, the extension of which is your neck. Thus, the head, neck and spine remain stacked atop one another throughout the swing.

Just Say No
Your first two vertebrae form a flexible framework that allows you to move your head independently of your body. The first cervical vertebrae is called the atlas, the second is the axis. The atlas allows the head to move up and down in the nodding motion that signifies yes while the axis permits the head to rotate around the neck in the shaking motion that says no.

Nodding yes during your swing encourages your spine to move up and down, a dangerous move that changes the effective length of the club, making it longer as you bob toward the ground and shorter as you straighten up. Consistency falters when you nod yes during your swing. In short, you want to keep the atlas quiet while the axis does its thing, and try to say no.

The Correct Way To Look Up
Because the spine is tilted during the swing, the head appears to travel up and down when it moves correctly, Ê la Annika, the poster child for a floating head. She uses her axis (the no motion) but keeps her atlas (the yes motion) stable until after impact. Thus, her head rotates around her neck sans any up-and-down action. This allows her to look over the ball rather than under it as it leaves the clubface. 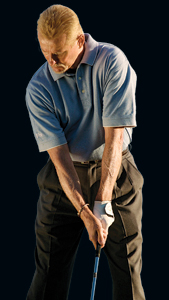 To experience the role the axis plays in your swing, stand upright with a pen in your mouth and rotate your head from shoulder to shoulder. Notice how the pen stays level as you rotate. Now tilt your spine as you would at address and rotate your head as above and you’ll see that the pen moves not only around, but also up and down.

The key here is that the up-and-down motion of the head results from the tilt of the spine, and if you keep your spine angle while you swing, that part of your head motion will take care of itself. Any independent bobbing of the head leads to losing your spine angle, a fact that promotes two valuable conclusions: 1) Using the atlas before impact ruins your swing and 2) so does not using the axis.

How Much Float?
The path the head follows depends on individual characteristics. Flexible players have much less head float and inflexible players have much more. The key is to let your head float with your body turn. Just how much depends on your body build. If you’re thin like Charles Howell III, the float will be slight. Medium builds such as Brad Faxon demand a bit more, and if you have a thick chest like Darren Clarke, your head should float noticeably.

The Preturn
For many years, Jack Nicklaus has counseled golfers not to move their head when they swing. Before you implement this bad advice, remember this: Nicklaus is famous for rotating his head as a trigger to start his swing, so by the time he reaches the top of his swing, his head, in effect, has rotated in order to stay in the middle of his shoulders.

_ÊIf you have trouble getting the float right, try precocking your head before you swing, i.e., rotate your head until your chin points to your back foot. Then start your swing by turning your front shoulder to your chin. Try this especially if you have a big chest and a thick neck.

Summary
_Ê Trying to keep your head from moving will lead to a reverse weight shift and a reduced coil. Fat shots and the fire-and-fall-back followthrough are the ungainly results of holding your head still.
_Ê To execute a solid pivot, your head must float and rotate with your spine, keeping its position in the middle of your shoulders.
_Ê Allow your head to rotate through impact so you look over the ball, not under it, as it flies away from the face.