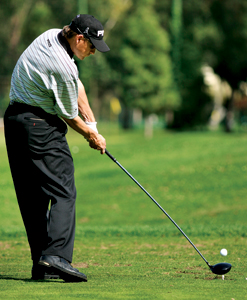 Like all members of the PGA Tour, I play a lot of rounds with recreational golfers in various pro-ams and charity tournaments. If there's one thing I notice during these rounds, it's how inconsistent most weekend players are off the tee. Obviously, the driver is the most difficult club in the bag to hit consistently, due to its long length (most off-the-rack drivers measure about 45 inches) and low degree of loft.

However, most recreational players make the driver even more difficult to hit accurately by taking a home-run swing every time they tee it up, which tends to result in one or two relatively long drives in the fairway, and countless others that don't fly very far and wind up all over the place, including on the wrong side of the OB stakes.

It's easy for me to tell when golfers are swinging too hard for their own good, even before I see the result of the swing. All I have to do is watch the body in the finish, and I can tell by the way they fall over, or backward or sideways, after the swing, that they don't have control over their body or the golf club. Overswinging is one of the biggest and most common mistakes in golf, and believe it or not, it doesn't just reduce accuracy, it also can minimize distance.
_Ê
Anyone who regularly watches PGA Tour events knows how comfortable and balanced most of the players look as they hold their finish on the tee and watch their shots fly down the fairway. This posing isn't just for looks; it shows that the player has made a well-balanced, controlled swing. Recreational golfers, on the other hand, can't pose because their bodies are out of control, which makes squaring the clubface at impact (for accuracy) and making solid contact (for distance) extremely difficult. To get your motion, and your shots, in better control, I suggest concentrating on balance more than speed in your swing.

To improve your balance and hit consistently straighter drives, try to make some swings with your driver while keeping the sole of your right shoe in contact with the ground through impact. Make these swings at about 70 percent of your maximum speed and be sure to make a full turn of your shoulders through the ball. Try not to let your foot come off the ground until it's pulled up by the rotation of your body, and concentrate on maintaining your balance as you pose in the finish. I know this sounds like a simple technique, but if you can learn to swing and finish under control, you'll hit the ball a lot straighter, and probably longer, than you ever have before. Just keep the urge to overswing in check, and your driving will improve almost immediately. 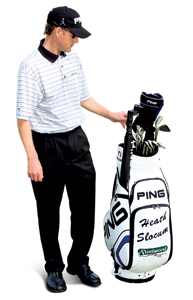 "A lot of weekend players think of the driver as a club made just for distance, and simply choose the one they think they hit the longest. But finding the right clubhead and shaft combination can improve your accuracy, especially if you're currently playing a club that has too little loft, or a shaft that's too stiff. In general, most recreational golfers are better off using a driver that has more loft, and a shaft with more flex, because that combination provides a lot more forgiveness. On days when the swing and timing aren't working as well, a more forgiving club can be a big help."

In The Bag
Slocum currently is playing the new PING G2 driver with 7 degrees of loft and an extra-stiff shaft. At 460cc, the G2 is_Ê the largest driver PING has ever introduced and also is the easiest to hit. Features of the G2 include an innovative, precision-milled variable face thickness, which is designed to transfer more energy at impact for greater distance, as well as variable sole thickness, which places more weight low and toward the back of the clubhead for lower spin rates and higher, more optimal launch angles. Slocum also carries a mixture of PING S59 Tour irons and G2 irons, as well as a hybrid iron that has the loft of a 2-iron, but is easier to hit.

Heath Slocum earned his first PGA Tour victory at the 2004 Chrysler Classic of Tucson. As of April 5, 2005, Slocum ranks 19th in driving accuracy and 28th in the total driving category on Tour.