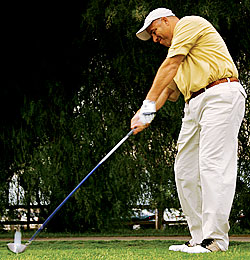 A wrist- or hand-dominated motion can be useful in certain situations around the green, where less-than-perfect lies mandate a conscious manipulation of the clubhead. However, being wristy or handsy on the tee, where the objective is to generate maximum power and distance, is a definite no-no. With the big stick, you should strive to keep your hands and wrists as quiet—or passive—as possible.

That’s especially true during the backswing. The club should be taken away in a one-piece motion with a full shoulder turn and with the big muscles in the legs and torso controlling the swing. Only when the golf club reaches the waist level should the wrists begin to hinge. That’s the only point when the swing gets “wristy.”

For many golfers, there’s a temptation to control the club with the hands. That’s the “hitting instinct” taking over—the preconditioned idea that we somehow have to supply all the power with our arms and hands. Bag that instinct and let the golf club do the work. That’s what it’s designed to do.

The hands and wrists should remain passive through the beginning of the downswing, which is triggered by a weight shift and turn toward the left side. Only after the arms have started their downward route—a move more or less dictated by gravity—should you attempt to create acceleration with the arms and hands.

At that point—defined as “pre-impact”—the sensation with the hands and arms should be that of cracking a whip or hitting a smash with a tennis racquet or ping-pong paddle. The key is to think “faster,” not “stronger.” The best way to achieve this is to have relaxed wrists throughout the swing and not try to force anything. More relaxed arms and wrists always equals more power. Until the moment of truth, keep your smaller muscles out of the picture and allow the bigger muscles to take charge.