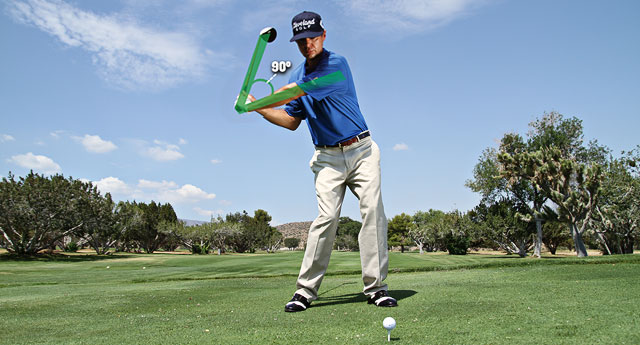 One of the most common power leaks for the average player is the early release of the hands through the downswing. Maybe it’s just human nature to want to overpower the golf ball with the arms and hands, but the reality is that doing that actually weakens your ability to hit the ball farther.

What I like to do is rehearse a simple yet effective drill. Take a few practice swings, and just as the club reaches parallel to the ground on the downswing, hit the brakes. Stop your swing and take a look at where the club is positioned relative to your body. If your arms are extended, and the club is away from you, you’ve most likely released the hinge in your wrists too soon. This leads to what some call “casting the club,” much as you’d cast a fishing line into the water. And when you do this, you run the risk of not only weak shots, but errant ones, to boot.

If you’re holding your hinge correctly at this point in the swing, you should see ample wrist cock, the toe of the club toward the sky and the hips already rotated open. Now, here’s a little secret that some better players instinctively know. It’s nearly impossible to hold the hinge in your wrists for too long. Due to the centrifugal force that you generate as you swing the club around your body, the wrists will eventually unhinge automatically through the downswing. In other words, there’s no need to force the unhinging of your wrists!

The key is to let the wrists unhinge naturally and try to hold your hinge for as long as you can during your downswing. Players such as Dustin Johnson, Sergio Garcia and Rory McIlroy have tremendous wrist hinge on their downswing, only to then release as soon as the hands are above the ball through the shot. This results in extraordinary whip and power through the shot.

Practice this drill, and I’ll bet you’ll see your distance and consistency improve. And don’t force the unhinging of your wrists!

One thought on “Check Your Hinge”