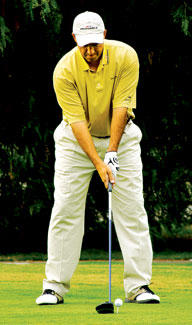 My standard response to a question I frequently field at clinics and exhibitions about the proper feeling at address is: It's like cement and spaghetti.

That strange combination of metaphors raises a few eyebrows until I explain what I mean.

By cement, I'm referring to the feeling in my torso and legs. I want to establish a strong foundation for the golf swing, with my weight balanced over the balls of my feet, my posterior extended, my spine tilted at an angle created by a slight bend forward at the hips and my knees slightly flexed. I want to feel the sensation that my legs have been anchored in cement and nothing–not even a gale-force wind–can push me off of that solid base.

By spaghetti, I'm referring to the feeling in my arms, hands and wrists. My arms, hanging loosely in front of me, are relaxed–almost as limp as a noodle. I'm not squeezing the club or clutching it with my shoulders, knotting myself into a ball. Spaghetti also implies that there's no tension in my arms or shoulders. This absence of tension allows me to whip the clubhead through the ball, generating maximum speed. Speed creates distance.

While it's true many amateurs address the golf ball with cement- and spaghetti-like features, they do so in reverse fashion. They're too tense or rigid at address, with their arms, hands and wrists looking like they're set in cement. They clutch the club too tightly, and the resulting case of frozen shoulders makes it virtually impossible for them to swing with athleticism and grace.

Similarly, many amateurs set up with their torso and legs as limp as spaghetti noodles. This leads to overactive feet, knees, hips and legs during the backswing and causes a myriad of problems. Instead of establishing a strong base, they have a weak foundation that makes staying in balance something of a crapshoot.

Work on a feeling at address that combines cement and spaghetti–but applied to the proper body parts.

Two-time National Long Drive champion Art Sellinger is the owner and CEO of Long Drivers of America, which conducts the RE/MAX World Long Drive Championship and the professional Pinnacle LDA Tour. He represents the Four Seasons Resort and Club at Las Colinas, Texas, and Cobra Golf.