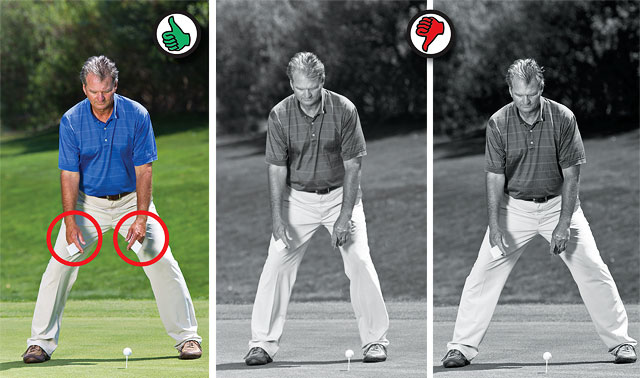 No, I'm not playing a game of cards, but I am holding a couple in these photos. One in each hand and placed between my index and middle fingers. Why? I want both cards to face the same way–like in the color photo above. When they do, I know that I've found my perfect stance width.

Let's back up a second and talk about the golf swing. As you know, it's made up of lines, angles and neutral positions. This tip is about making sure you find the right neutral position. Over the years, you've probably been told to grip the club the way your hands naturally hang at your sides. But if you do that from an improper stance width, your arms and hands won't hang the same way. One hand may face out, while another may turn in. Since your arms and hands return to neutral during the swing, your clubface will, as a result, open or close as your hands return to neutral through impact. And that leads to hooks and slices.

So, how do you find the proper stance width and, hence, the perfect balance? Well, first, it's important to know that every golfer has a few stance widths in which his or her body is perfectly in balance. (But no more than three to four different stances.) Once you're aware of that, follow these easy steps.

• Stand facing a mirror.
• Place a playing card between bothindex and middle fingers.
• Stand as you would for a driver shot.
• From there, let go of the "club" and relax your arms, letting them hang.
• Look in the mirror.

Are the cards facing the mirror? If not–if one is turned in for example–then you know you're not in proper balance. Try different widths–narrow, wide, etc.–and note how the cards' orientation changes. Use a yardstick to notate your perfect stance widths. As I said, you may have a number of correct stance widths.

Note that these widths change over time. That means you should check your stance widths on occasion to make sure you're standing at the appropriate widths. I think this simple way of finding the right balance is a guaranteed way to better golf swings.