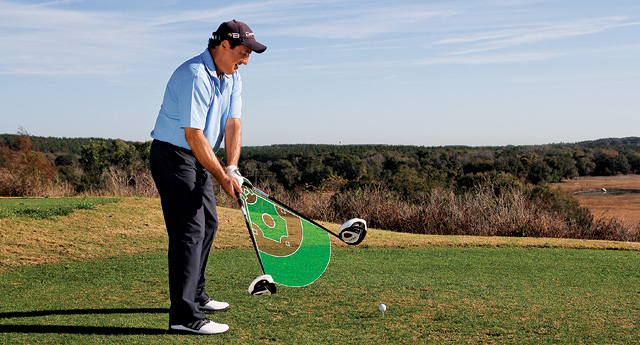 When it comes to making a golf swing, it’s safe to say that there’s really no one right way to do it. Reason being, we all are made up of different sizes and have different swing tendencies, physical abilities and so forth. Sure, there are some basic fundamentals that you need to master to play your best golf, but even that means there’s some leeway toward one way or another.

With regards to the onset of the backswing, this holds true. There’s no ideal or perfect takeaway to begin the golf swing. I have seen great ballstrikers take the club back outside the target line, while others have swung the club back toward the inside of the target line. Sure, you can exaggerate too much on both sides, causing all sorts of swing problems, but when it comes to slightly outside or inside the target line, it’s not that big a deal. An inch or so here or there will not ruin your backswing!

The key is to keep the club in a comfortable ballpark range that’s not too inside or outside the target line. A backswing that’s too inside often leads to pushes to the right, and an outside backswing tends to create sliced shots or smother hooks. But an inch or so over or under should not cause any problems. And by the way, if you’re focused too much on taking the club straight back, you’ll likely force the club too far to the outside, leading to a slice! Instead, focus on things that do matter, like maintaining a smooth tempo, a solid rotation of the body and extension of the arms. The club should move inside the target line by itself. No need to force it either way.

If you pay more attention to those details and don’t attempt to take the club back on a perfectly straight line, I bet you’ll start seeing better drives right away.

Top-25 Instructor Barry Goldstein can be reached via email at drforgolf@aol.com.