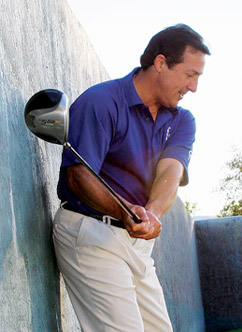 One of the most common swing flaws occurs when golfers take the club too far inside the target line on the backswing. Usually, this move is caused by a backswing that's controlled by the hips and the dipping of the shoulders away from the ball. And, as you may guess, this move leads to a handful of bad shots, including pushes, topped shots, slices and duck hooks.

To fix this problem, try what I'm doing here. Situate yourself with a wall behind you and take your address position with your backside barely touching the wall. Now, in slow motion, simulate your backswing until your arms reach waist high. (If you think you might hit the wall with your club, try this exercise with the headcover on so you don't damage your club.) If you find your clubhead touching the wall, you're moving too far to the inside!

With a correct backswing path, eventually you'll hit the wall with your clubhead, but in this first part of your backswing, the club should run along the target line for as long as possible. Practicing with a wall behind you will help you do just that. This exercise is also helpful for players who struggle with what's called laying off—aka, dropping the clubhead behind the body during the backswing because of a weak pair of wrists. Once the hands reach waist high, the toe of the clubhead should point straight up and be away from the wall (like I'm doing in the above photo and not like I'm doing here). If the clubhead touches the wall, then you know you need to practice your takeaway by first leading the backswing with the upper body along the target line. Once the upper body can't turn comfortably anymore, the lower body then kicks in to round out a complete backswing.