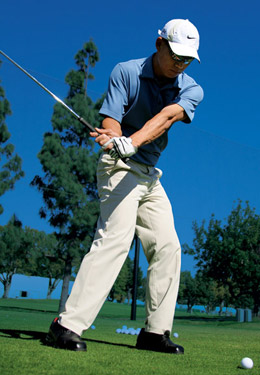 Tour rookie Anthony Kim, or AK as he's also known, has a lot in common with another well-known (#1 in the world) Tour player from southern California. A former Junior World champ and big-time junior golfer, AK earned both Freshman of the Year and All-American honors at The University of Oklahoma. As part of a victorious U.S. Walker Cup Team, AK capped off his amateur career and headed to Q School, which he breezed through on his way to becoming a member of the PGA Tour. With a serious approach to physical conditioning, AK is part of the new wave of fit, confident and long-hitting young guns who are ready to challenge the best players in the world (even you know who) right now.

Rotated Arm
Anthony retains the rotation of his left arm late into the downswing. This keeps the club shaft pointed directly at the target line, perfectly on plane, and enables the club head to lag well behind the hands, producing tremendous power. 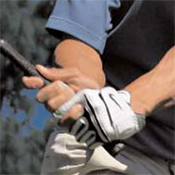 Trigger Power
The club shaft is pressed against the middle knuckle of the right index finger, right where it should be. Notice how the index finger is separated from the middle finger. When combined with the right thumb's location on the opposite side of the handle, the right hand will give maximum support to the club on the downswing.

Level Legs
There's no '70s style leg drive here. Anthony's knees lead the downswing by quickly rotating around toward the target. By leading with the left knee, the hips can't slide, keeping them stacked under the shoulders and above the feet. This modern move personifies the transformation in technique to a more athletic motion.

Core Driven
No beer bellies here. Anthony's core, (his abdomen) is very strong and the anchor of his swing. It enables him to generate enormous power during the change of direction from backswing to downswing. The move is quick, sharp and very dynamic. The strength of his core stabilizes the body throughout the swing and is the key to maintaining his posture.

Laced Up
AK is all over it, from top to bottom. His eyes are parallel to the horizon, his core is engaged, hips level, torso stacked and his feet are pushed into the turf. There's no wasted motion: The club can't be thrown off plane, and there can be no decrease in clubhead speed. He's getting the maximum possible from his golf swing.

AK is currently averaging more than 300 yards in driving distance, putting him among the longest on Tour. He does it with Nike's One Platinum, just like Tiger._Ê www.nikegolf.com