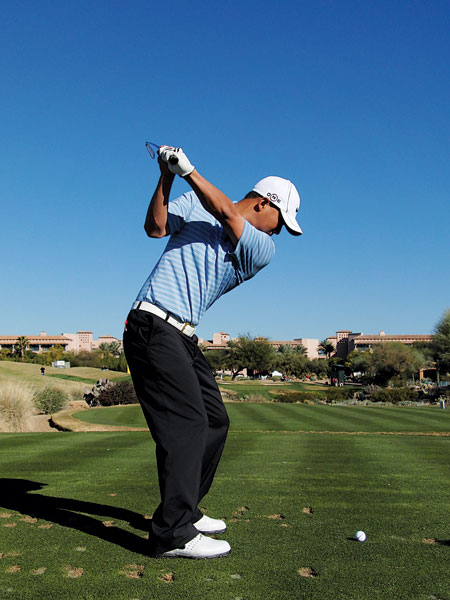 Don't get us wrong, Anthony Kim still has in our opinion, one of the most compact and powerful swings on the PGA Tour. As is the case with this shot, he actually just barely missed green, albeit a long ways to the right and at the opposite end of the pin which was tucked in the back left corner.

What happened? Well if you notice in the sequence, AK's position at the top is near flawless, but at impact, check out his right hand. It's a little under his left, meaning the clubface hasn't closed enough and is slightly open at impact. AK was trying to draw the ball towards the left pin, and because his face was slightly open and his swing path also slightly open, he blocked the shot to the right.

What can you learn from this? First of all, AK's shot still landed just on the edge of the green, even though his swing wasn't 100-percent perfect. This is a testament to how well his other fundamentals are, such as swinging on plane, rotating effectively and so forth. As for you, by honing in on your fundamentals, you can more often than not get away with small flaws that creep into your swing every now and then without feeling the need to be perfect every time.