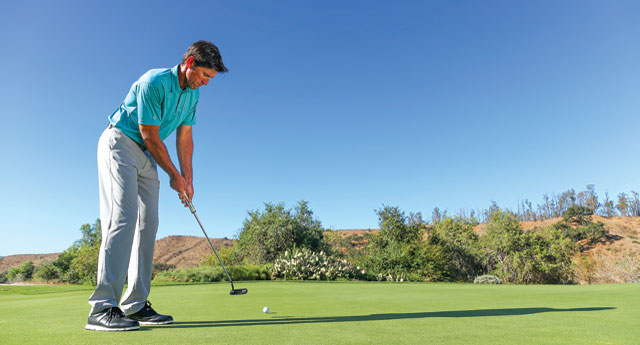 Yes, there’s a hole down at the edge of the green, but I’m not trying to hole this putt. Instead, I’m working on developing better distance control by ignoring a specific target and trying to get the ball to stop just on the edge of the green where it meets the fringe. This drill works wonders for helping you determine the speed of the greens, as long as you, again, avoid focusing on a specific target. Do that, and your sense for distance will be heightened, and you’ll three-putt less often.

If you think the secret to lower scores is to hit hundreds of golf balls out on the practice tee, I have news for you: It isn’t. Hitting a lot of range balls might help you swing better, but it won’t help you shoot lower scores nearly as much as honing in on your short game, specifically, your putting.

If you want to improve your putting, you need to get your senses involved. Putting is the simplest of all golf skills, but is possibly the easiest to complicate. There are many great putters who have several different grip styles, stroke styles and putter designs, and everyone is unique in what works. There really is no one right way to get the task done; however, great putters do have one thing in common. They connect to the right side of their brain, which is where the brilliant human supercomputer lies. They’re able to sense pace, line, depth and the feel of their stroke in their body during putt preparation and during the actual stroke. Great putters truly know how to use their senses, not their thoughts, to allow their true genius to come out.


PIN THE TAIL ON THE HOLE
While how you stroke the ball is important, how you perceive your putt is equally critical to success. If you feel like a putt is longer or shorter than it really is, your chances of making it are greatly reduced.

A great drill for developing better depth perception is to address a golf ball from 30 to 40 feet. Evaluate and address the ball as you would normally. Then, just before you stroke the ball, close your eyes, stand up and pace toward the hole with your putterhead in your hand and the grip end pointing toward the green. From here, walk toward where you think the hole is, and when you get to the spot where you think it is (remember to keep your eyes closed!), stop and point at the hole with your putter.

Where did you end up? In these photos, you can see I mentally perceived the putt to be about two feet shorter than it actually is. In fact, most of my students who do this drill tend to come up short, which is why they often leave their putts short, as well!

Do the drill again until you get closer to the hole or maybe go slightly beyond it. Another reason why people come up short with this drill is that they tend to look at a putt from only the ball to the hole. For you to have a good sense of depth perception, a key to judging pace, you need to evaluate the length of the putt and also how the green moves beyond it. Look at the putting surface contours, whether it slopes off a hill or mountain. If you take a broader look at your putts, you’re likely to get a better sense of how a putt will roll than you would only looking at a line between the ball and the hole.

PUTT WITH SILENCE
A great drill for directional and distance control is to putt with a glove in the cup to mute the sound of the ball dropping in the cup. To do this, select a relatively flat putt from about 15 feet, then place a glove in the cup, go back to your ball, close your eyes and putt. Allow about two seconds to pass, then guess how far right or left (or in) your ball ended up from the hole. Continue to do this until you can guess accurately three times in a row. Next, do the same thing, but guess how far short or long the ball ended up relative to the hole. Continue until your pace guesses are accurate three times in a row. Finally, do it again for a third time, but guess both line and pace until you can accurately guess the stopping point of the ball relative to the hole three consecutive times.

This exercise will help you with seeing the putt accurately, trusting your line and developing a real keen sense of touch without relying on your eyes and ears.

EYES ON THE TARGET
Recently, Jordan Spieth has been making this exercise popular because he actually does it in competition. Start about three feet from the cup on a straight putt. Instead of looking at the ball during the stroke, focus your eyes on the back of the cup or a small target. The goal is to feel like you’re totally “connected” to the target before you do the stroke. It may feel weird at first, but stay with it, and you’ll get the sensation that the target almost pulls the ball from your putter and into the hole. As you sense deep target connection, keep increasing the length of the putt. Who knows, you may find this style of putting to work so well, you may want to do it on the golf course like Jordan!

FEEL THE WEIGHT
Great putters use the muscles in the upper back to drive the putting stroke. One of the best ways to sense the feel of a solid stroke is to rehearse your putting stroke with a four-pound medicine ball. If you don’t have one, grab a brick, rock, anything heavy enough that you can hold and get your upper back muscles engaged. Rehearse your putting stroke and allow the medicine ball to pull your arms and release any shoulder, elbow and wrist tension you may have. Did you catch that? I want you to feel tension in your upper back, not in your shoulders, arms or hands! Rehearse your stroke in response to the natural downward pull that you got from holding the medicine ball. When you pick up your putter, you’ll be much more aware of the natural pull through the putterhead, which will free up the tension in the smaller muscles and help you make smoother, more rhythmic strokes.

Great putters often say they feel the pull of the putterhead throughout their pendulum-like strokes. Poor putters tend to push or flick the handle to create the motion, which leads not only to a lack of distance control, but it wreaks havoc on your ability to putt consistently on your intended line. So, feel the weight of the putter as though it’s pulling your arms toward the ground. You’ll make smoother strokes!

LET IT GO
One of the worst ailments when it comes to putting is having too much tension in the hands. The previous drill helps eliminate some tension, but to really focus on the hands, this is a great drill.

Practice making 3-, 6- and 9-foot putts, but allow the putter to fall out of your hands right at impact. You’ll start to notice a feeling of decreasing tension in your hands, much like the best putters in the world do! Once you have the feeling of “letting go,” practice making all sorts of putts with a decreasing grip pressure through the forwardstroke, and watch your feel and pace improve!

Another great way to eliminate tension in the hands is to consider adopting a non-tapered grip like you see I have here. These grips have become popular because they allow the hands to rest on the putter, not only with less tension, but equal amounts of tension in both hands. I tend to prefer medium girth ones, but some players like the big, fat grips for an even more relaxed feel in the hands. Try one–they work!

The goal is to correctly visualize (perceptual awareness) the curving line for the putt that would go through the tees, then into the hole. You then putt three balls, adjusting the start point or the speed after each one until you score par for the game, which is a two-point average per ball, or six total points. After achieving par, simply choose another breaking putt and repeat the game. The more you do this exercise, the better you’ll get at seeing the correct line and developing great speed and line control with your stroke!

WEDGE PUTT
A great way to increase your sensitivity to the putter and sharpen your focus is to putt with a lob or sand wedge. To do this, try making 10 six-foot putts by hitting the ball with the leading edge of the wedge at the equator of the golf ball. This may sound easy to do, but it’s not! You have to make contact with the leading edge and the ball precisely to ensure a smooth end-over-end roll. If you make contact above the equator, you’ll lose distance control. Any lower, and you actually might lift the ball up off the ground, imparting too much backspin.

After a few tries, return to using your putter and try to apply the same sense of precision you needed to have success with the wedge. You’ll likely find yourself catching the sweet spot of the putterface more often, which leads to straighter, smoother rolls.

SEE IT TO MAKE IT
To summarize, better putting comes from looking at every putt from a wide-angle-lens perspective. Start with your eyes and read not only the distance from the ball to the hole, but also the lay of the land. Evaluate how the course slopes, drainage areas and features around the green that influence the contours of the green. Next, close your eyes and visualize the putt in your mind. Paint a picture of the ball rolling along your intended line and into the cup. Once you see and feel it, it’s time to trust your read and put it to work with a tensionless stroke.

Try these drills and exercises the next time you have some practice time. If you’re tight on time and only have a few minutes before you tee off, take a few moments to yourself and start feeling the weight of your putter with your eyes closed, roll some putts to the edge of the fringe, and try walking the length of a few putts with your eyes closed. The point is to engage your senses and develop a better feel and mental awareness of how the ball reacts when it leaves
the putterface. Get out there and use your senses, and shoot lower scores!

Dan Martin, PGA, is the Director of Instruction at Rustic Canyon Golf Course in Moorpark, Calif. Get more information at www.danmartingolf.com.

2 thoughts on “Use Your Senses”