If you look around the putting green at your local course on a Saturday morning you’ll see an unlimited number of different styles, preferences and philosophies when it comes to putting. Even on the PGA Tour you see a plethora of different grips, stances, and putter shapes. It makes you wonder if there is a rhyme or reason for what anyone does when it comes to the “flat stick.” That’s where my ABCs of great putting come into play.

Given all the variability that exists, I often see players attempt to fix their putting woes by simply changing styles. I hear things like, “If the short putter isn’t working, then let’s try the long putter”…or “I’m not putting very well with that blade putter so I think I’ll try the mallet head.” While it’s true that different combinations of technique styles and putter shapes can all be good for any particular player, rarely does a simple change in the club or technique lead to any real progress in putting. Instead of changing putters or grips, you have to work to develop and improve the three most basic elements that form the foundation of a good putting stroke: start line control, speed control, and green reading. Simply stated, A+B+C equal a holed putt! 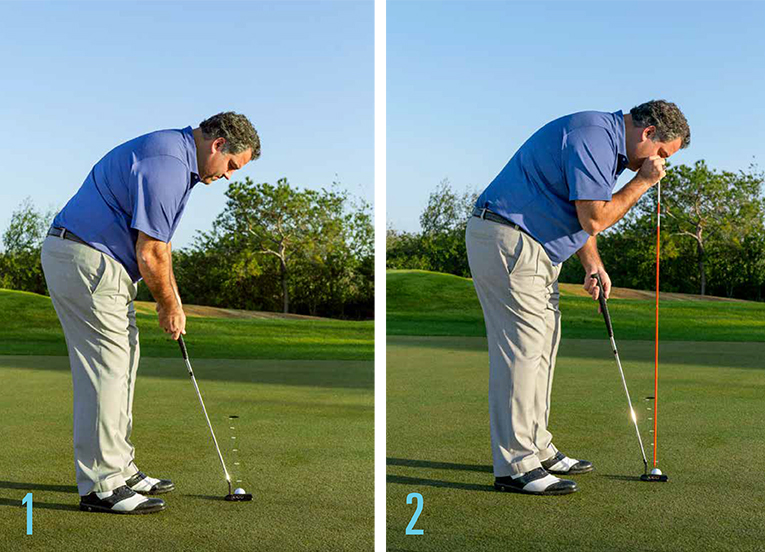 Starting your ball on the intended line in putting can involve many factors from set-up to stroke mechanics to putter head design. However, it starts with the position of your eyes relative to the ball and your ability to see a straight line when you look at the intended target. If your eyes are positioned correctly, your ability to aim the clubface at the target improves dramatically…which in turn increases the probability of starting the ball on-line.

To find the proper position of your eyes start with a flat, uphill 6 to 8-foot putt and line up a row of coins or ball marks in a perfectly straight line from your ball to the hole. While staying in your posture, move your body closer or farther away from the ball until the line of ball marks appears straight and pointing at the hole. See Photo 1.

Once you find the correct position of your eyes, you need to check where they are relative to the ball. You can use a simple alignment rod held loosely under your eyes that allows you to see where your eye line falls (it could be inside, outside, or directly over the ball). Once you find the right spot, practice enough with the alignment rod to be able to repeat that position on every putt. See Photo 2.

Your ability to vary the speed at which you roll the ball might be the most important of the three ABCs. Speed issues plague every level of golfer and improving your speed control can quickly lead to massive improvements in your score.

To improve your speed control on shorter length putts, try the “leapfrog drill.” Choose a flat, uphill putt around 10-12 feet in length. Hit the first putt soft enough to stop just short of the hole without going in and then try to stop each successive ball just short of the last one. The goal would be to stop as many balls as possible between the hole and your starting spot (Photo 3). The game ends if any ball rolls farther than the one before it. If you can get 10 or more balls to stop in the designated area, you’ll know your speed control on short putts is good.

The final of the three ABCs is often the most challenging to practice and improve. The correct read for any given putt can be variable based on a combination of start line and speed; one person may read more break, hit it with softer speed, and make the putt the same as someone else who reads less break and hits it harder. Both golfers would have read the putt correctly, but differently, based on their choice of speed.

Because of this variability you should make sure you have a good handle on the first two elements (speed and start line) before moving on to green reading. Once you do, you can use a few simple tees to create a drill that will test your ability to read the putt correctly.

First, choose a breaking putt of 10-12 feet, read the putt using the same methods as you would on the course, and place a tee in the green near the cup (indicated by white arrow) to indicate how much break you would play and where you would aim the putter face. Next, place two tees in the green about one foot in front of the ball on the same line to form a “gate” for the ball to roll through (indicated by blue arrows). See Photo 4.

Finally, aim the putter at the tee near the cup and hit the putt. If the ball rolls through the gate and goes in you’ll know you read the putt correctly. If it misses below the cup you’ll know you didn’t read enough break, or too much if it misses high. You should try the drill on putts breaking both directions and, if done correctly, it will provide you with excellent data on your tendencies when reading putts.

Brandon Stooksbury, PGA, is Head Teaching Professional at Idle Hour Golf Club in Macon, Georgia and author of The Wedge Book, as well as an upcoming book on putting.