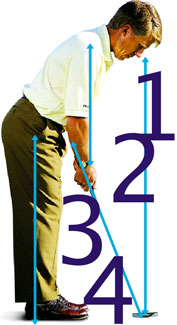 Unlike the golf swing, there are almost no centrifugal forces at work in the putting stroke. Therefore, whatever you do at address pretty much determines what you'll do with the putter during the stroke. In studying the best players on Tour, it's easy to find common denominators in both their setup positions and strokes. Obviously, there are exceptions to every rule, but for the most part, common traits run rampant in the setup positions of great putters. Specifically, they establish four key setup lines.

2. The second line runs from the shoulders straight down through the arms and hands. When the hands and arms are in alignment under the shoulders, the player can swing them back and through naturally, creating the optimal putterhead path.

3. The third line bisects the center of the hips and the heels. The proper alignment of the hips and heels creates balance and stability during the stroke. When a player is centered, stable and in balance, he or she can attain consistent, solid contact.

4. The fourth line is drawn from the puttershaft through the inside edge of the forearms. This line is achieved by placing the grip of the putter more through the palms than in the fingers. By aligning the shaft and the forearms, a single lever is created, resulting in optimal control during the stroke.

Flatten It Out
Establishing and maintaining a flat left wrist throughout the putting stroke is the key to rolling the ball consistently. For one, it keeps the left wrist from rotating, and if the wrist doesn't rotate, the putterface can't open or close. One thing you can do to encourage a flat left wrist in your putting stroke is to use a shorter putter (33 inches should do the trick). This will allow your left arm (and everything attached) to hang straight from the shoulder. Also, position the ball off the front foot. This will flatten the left wrist and help line it up with the outside of the left shoulder.