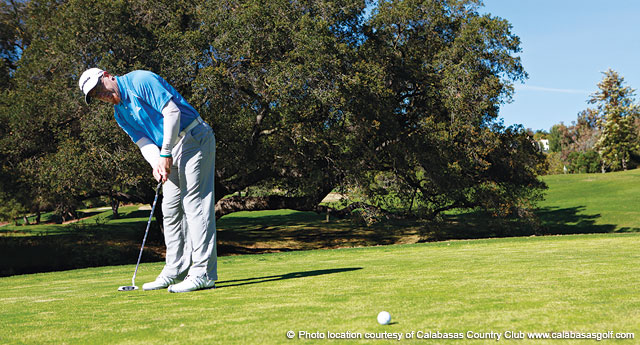 The next time you play golf, I want you to count your total number of putts. Don’t worry about how many putts you have per hole or how long or short they are. Just find your number. Once you have a number, I want you to divide the number of putts you made by the total number of strokes. Now, what’s your percentage? I average somewhere around 35% on a good day, 50% on a bad day. You might have higher percentages, or maybe a little lower. Now, be completely honest with yourself. Do the percentages of your putts match up with the amount of time you spend practicing your putting? I’ll bet you’re nowhere close! Most golfers spend the majority of their time hitting woods and irons on the practice tee, when they should be devoting a lot more time to practicing their putting. And even more important than the time spent practicing your putting is using the time to practice effectively. This is what’s known as practicing wisely, instead of practicing just for the sake of practicing, which sometimes can actually hurt your golf game.

In this article, I’ve taken a look at a handf__ul of putting elements that I think you should work on. It’s the stuff that you can work on by yourself, without an instructor nearby. Just remember, the time you spend on your putting should reflect at least the percentage of your putting game in relation to your overall strokes. Now let’s get started, shall we?

PICK THE RIGHT STANCE AND STROKE

This may seem really obvious, but it’s also one of the most overlooked aspects of the putting game. And I don’t care what anyone has told you in the past, there’s no one right way to address and stroke the golf ball. However, there are some constants I like to see with my students, but things like feet width, grip and so on are all matters of personal preference. Don’t let anyone tell you otherwise!

In the photos above, I’m showing what I’d consider to be two ends of the spectrum when it comes to good putting. Starting with the left photo, I’m set up in a square position, my hands are directly over the golf ball, the ball is slightly forward of center, and my weight is slightly favoring my left side. This stance/setup position favors golfers who want an arcing stroke that naturally arcs from inside the target line on the backswing, square at impact and inside the target line on the followthrough. The key with this stroke is to remember that I mean arc relative to the target line, not the path of the putterhead. The path of the putter will naturally swing inside to inside, relative to the target line, but the clubhead should always stay square to the path on which the putterhead is traveling.

The other end of the spectrum is represented by the upper right photo. In it, you can see I have an open stance, and my weight is favoring more of my left side. The ball position is forward in my stance, and instead of the butt end of the putter pointing at my navel, it’s more in line with my left arm. This stance/setup position is great for a stroke that moves inside the target line on the backswing and straight down the line on the followthrough.

Of these two putting stances/setups, the only thing I pay attention to is whether the position of the head and hands is too far behind the ball; I don’t like the grip to look forced too low or too high on the grip, and I prefer that my students either favor their left side or, at worst, stay neutral.

I don’t know if you noticed, but at this year’s Memorial, Tiger putted with a hybrid of the two stances above. His upper body looked like the upper left photo, but his lower body was open to the target. Why did he do this? Probably because it felt most comfortable. And for you, that’s the most important thing. Stick with a stance/setup that’s most comfortable for you and that you can easily repeat.

UNDERSTAND HOW YOUR STROKE SHOULD WORK

Once you have your stance figured out, you need to match your stroke to your stance. The pics above show a stance with open feet and ball-forward positioning (identical to the upper right photo on the opposite page). Let’s call this a “push stroke.” This means, on the backswing, the putter should feel as though it moves inside the target line, and on the forwardswing, it should “push” down the target line. Whether that actually happens or not isn’t the point. Allowing the club to move inside on the backswing helps the putterhead swing properly since even with this push stroke, the putterhead should release eventually in the follow through. This type of stroke works best by holding my left wrist flat through the forwardswing, and my whole putter moves to my left side. If I had a glove on my left hand, the velcro on the glove would face the hole at impact and in the followthrough (until the putterhead releases). See how you can barely see the knuckles of my left hand after impact? That’s what you want with this stroke.

If you prefer to align your body and feet more parallel to the target (below), you should have a stroke that’s free to arc a little more. This means, relative to the target, you should feel as though you drag the putter inside the target line on the backstroke, then square at impact, only to close through the followthrough. In the photo below, even after impact, I haven’t closed the putter yet. That’s okay, and it doesn’t mean I’m not arcing. It just means the putter is on a wide arc. Finding how much you like to arc the putt, well, that’s a matter of personal preference. However, keep that grip end of the putter pointing at the navel, and both wrists bent when doing this stroke.

MATCH YOUR FOLLOWTHROUGH WITH YOUR STROKE

How you follow through on your putts can be very telling of how well you just rolled the ball. And thinking of your followthrough and not your stroke can actually help smoothen your stroke out and accelerate better.

If you have a push-style stroke, the correct followthrough is one like you see here. Notice how the butt end of the putter isn’t pointing at my navel and the hands are hanging out in front of me with a flat left wrist? This position indicates I’ve not only swung the putter down the target line, but also prevented overusing my wrists, which is a common problem for this type of stroke. Think of this stroke as more of a pushing of the ball toward the hole with my arms.

The arcing stroke tends to benefit golfers who like to let the weight of the putter swing more. That’s not a bad thing, if that’s what you’re trying to do in the first place. The trick is to match your followthrough to your stroke. In this case, because you’re arcing the putter, the butt end of the putter should point at your navel through the stroke and into the finish. This means allowing the wrists to hinge on the backswing and followthrough (as you see here at right). It’s not as important for the upper body to get active in the stroke, but if it does, that’s okay. The key is to stay centered and don’t sway the body away from side to side. Let the putterhead pass you going back and on the followthrough.

STEADY YOUR HEAD NO MATTER WHAT

A great drill to make sure you don’t move your noggin is to take advantage of a sunny day and use your shadow. I like to align myself over a putt (as you see here) and see if my head moves as I rehearse. If it does, it means I’ll likely shift from side to side, often with knees or legs as the culprit. Or, I might be tilting away from the ball too much at impact. Either way, this simple drill gets me back on track. Try it; it works.

FIX ANY DECEL OR ACEL

When it comes to acceleration, it’s critical when you hit shots that fly in the air. But with putting, I think acceleration is often misunderstood. One thing I don’t want to see from my students is a really short backswing and a fast, long forwardswing, or a long backswing with a short forwardswing with the putter. This type of stroke makes it impossible to have good distance control, and to me, looks and feels unnatural. Instead, I like to see my students have an equal pace, both on the backswing and on the forwardswing with the putter.

If you struggle with a stroke that’s long going back and short on the followthrough, try using a tool called the Swinkey (swinkey.com), and place it outside your right foot (left photo). This will physically and instinctually shorten your backstroke as you practice, helping you avoid having too long a backstroke, but still have a free-flowing forwardstroke.
In case you struggle with the opposite problem, try placing the Swinkey in front of you and avoid making contact on your followthrough.

Either way, practice and rehearse your stroke so it has an even, pendulum-like stroke both on the backswing and forwardswing. Both motions should be at the same pace, tempo and rhythm.