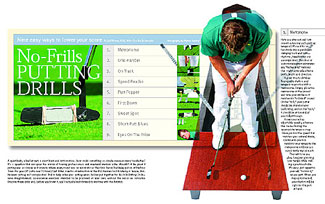 A quiet body, a ball at rest, a short back-and-forth motion—how could something so simple cause so many headaches? It’s a question that occupies the minds of touring professionals and weekend warriors alike. Wouldn’t it be great if putting was as simple as it sounds, where every round was as automatic as the clinic Aaron Baddeley put on at Harbour Town this year (97 putts over 72 holes)? Jeff Ritter, director of instruction at the ASU Karsten Golf Academy in Tempe, Ariz., believes putting isn’t complicated. And to help solve your putting woes, he has put together his No-Frills Putting Drills—nine straightforward, no-nonsense exercises intended to be practiced on your own, without the aid of an instructor. Practice these drills and, before you know it, you’ll actually look forward to working with the flatstick.

1 Metronome
Have you ever noticed how smooth a touring pro’s putting tempo is? It’s as if his or her stroke was a pendulum swinging back and forth—rhythmic, free-flowing and uncomplicated. This kind of uniform movement eliminates any “herky-jerky” motions that might adversely affect a putt’s length and direction.

A metronome has adjustable speeds, a feature that makes finding the appropriate tempo a snap. Once you find the speed that matches your natural stroke, continue to practice matching your tempo to the metronome until you can consistently reproduce it.

The next time you play, I suggest grooving your tempo while making a practice stroke. It’s easy. Just repeat to yourself, “tick-tock,” as you putt. When you step up to the ball, your rhythm will be right for the putt at hand. 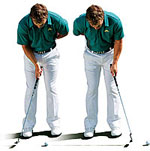 2 One-Hander
Some players like to feel as though one of their hands is guiding the stroke through impact. For example, Tiger Woods wants his dominant right hand to control the stroke, so he frequently practices with only that hand on the handle. Whatever your preference, practicing with just one hand is a great way to unlock the feel and flow of a pure putting stroke.

Hold the putter with one hand only and make a stroke. At first, the sensation of a one-handed motion might feel unusual, but as you practice, you’ll find it’s actually fairly natural. As you practice from a variety of distances, don’t be afraid to put a little wrist action into your stroke, as it promotes a true roll. Also, allow yourself to be loose—a tension-free stroke usually produces the best results.

Remember, a natural wrist cock is common in every ball sport, whether the motion is hitting, swinging or throwing. It’s no different with putting. Rigid wrists make it very difficult to develop the desired soft touch needed on the putting green.

3 On Track
If you tend to push or pull your putts, your clubface or putter path is probably going to be off line at impact. Misaligned putterfaces cause your putts to veer off line by many feet, so keeping your clubface square at impact is paramount.

can actually stroke some putts. Try to re-create the square stroke you were making on the flagstick as you practice, and continue to alternate between this drill and stroking putts.

4 Speed Reader
If you play a lot of different golf courses, you know that green speeds can vary widely from day to day and course to course. Obviously, it can be extremely frustrating when you’re not accustomed to the speed of new greens, particularly if they’re significantly different than those on the course you last played. A very effective but simple technique to combat this problem is to exaggerate your practice stroke. In other words, if you’re playing greens that are significantly slower than you’re used to, take your practice stroke from a greater distance than your actual putt. This will force you to ingrain the feel of a longer, more powerful stroke. On greens that are faster than normal, take your practice stroke from a spot closer to the hole than your actual putt. Then simply go back to your ball and use that same sensation to make your stroke.

5 Putt Popper
A common amateur pitfall is to make a long stroke that produces a short putt. A great way to inject some energy into your stroke—and add much needed acceleration—is to practice this tee-popping drill. Place two tees in the ground, as wide apart as a golf ball, so they form a gate. Place the ball so that slightly more of it is on the hole side of the gate and make a stroke much like you did in the one-handed drill, with a little wrist hinge in your backstroke. “Tap” your putterhead into the tees. Your impact will be halted, but the ball won’t. You’ll be amazed at the solid contact you get from such little effort.

6 First Down
Hitting your putts the proper distance is more important than getting the correct line. (A two-foot, pin-high putt is always easier to make than a five-footer that has come up short.) A great way to hone your distance control is to practice this First-Down drill. Lay down two clubs, four paces apart, and start with a handful of balls a few feet short of the first shaft marker. Putt your first ball as close as possible to, but past, the first shaft marker. Your goal is to putt each successive ball past the previous one until it either stops short of your last ball or goes longer than the second shaft marker. If either one of these two things happen, start over. You’ll notice that when your objective is to get as many balls in a 12-foot space, but just a little bit farther than the preceding ball, your target focus will narrow and your distance control will improve dramatically.

7 Sweet Spot
One thing all Tour professionals have in common is consistent ballstriking—a product of the ball hitting the center of the clubface. In putting, these center hits produce good roll and consistent speed. To encourage this solid contact, wrap two rubber bands around your blade so they straddle your putter’s sweet spot. Putts hit off the toe or heel will cause your ball to veer offline. Centered strikes will send the ball rolling down its intended target line. After you feel confident that you can make contact between the rubber bands on a regular basis, take them off and try to continue making contact on the putter’s sweet spot. If you feel a change in contact quality, it’s time to put the rubber bands back on and resume the drill. 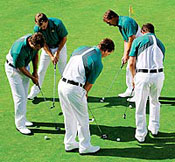 8 Short-Putt Blues
In the era of long drives, it’s even more frustrating to miss short putts. After all, when a 280-yard drive counts as much as a botched three-footer, it’s twice as hard to feel confident walking to the next tee. A great way to feel self-assured from short distances is to place eight balls in a circle two or three feet from the cup. Walk briskly around the hole and tap in

each ball, acting as if success is a given. You’ll be amazed at how many you make when you don’t overthink the little ones. If you really want to improve, start the drill over when you miss and don’t stop until you make eight putts in a row.

9 Eyes On The Prize
Unlike most sports, golf asks you to look at the ball rather than your target. (Imagine how silly LeBron James would look if he stared at the ball when he shot!) Still, like throwing a ball to a friend, it’s often easier to make putts when you look at the hole rather than the ball. When you look at the hole, the information being sent to your brain keeps you focused on distance and direction, not on the mechanics that can misplace your concentration. When you do this drill, keep your eyes on the hole and stroke away. Begin with putts within five feet; after you assume your setup position, look only at the hole while making your stroke. Once you feel more comfortable with this technique, move back to eight or 12 feet and repeat the process. While you may not want to take this technique to the course, you’ll be surprised how effective it can be at improving your confidence and feel for distance.