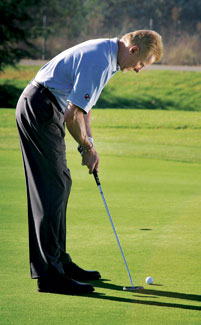 The secret to consistently putting well is to match your posture to your stroke type. However, the conventional wisdom applied by most recreational golfers is that while putting, anything goes (witness the claw grip, the left-hand low technique and the belly-anchored stroke). And while many a Tour victory has been fueled by an unorthodox method, one fundamental shouldn’t be ignored: How you stand to the ball conditions how you stroke it.

Shoulder Stroke
When putting, your shoulders work perpendicularly to your spine. Thus, if your putting posture is upright, your shoulders move more “around” rather than “up and down.” This merry-go-round action opens the putterface during the backswing, then squares it up coming to the ball (sans any excess manipulations). This is a very effective way to putt, as the exploits of golfers such as Ben Crenshaw and Greg Norman suggest.

Other great putters, such as Jack Nicklaus and Dave Stockton, favor a much more bent posture at address, with the spine tilted and the chest pointed toward the ground. In this posture, the shoulders, working at right angles to the spine, move more “up and down” than “around.” During the backstroke, the front shoulder moves down while the back shoulder rocks up. This teeter-totter motion is reversed during the forward stroke. With such a stroke, the face remains square to the intended line of roll from beginning to end.

The conclusion you should draw from the above is that if you feel comfortable standing upright over the ball (as many “bad backers” prefer), then don’t try to keep the putterface pointed at the target throughout the stroke. To match your posture and your stroke, allow the putterface to rotate with your shoulders.

If you choose a bent posture, then the pendulum stroke is the correct match. Allow the putter to follow the up-and-down action of the shoulders and remain square to the line.

Drifting Into Mismatch
If your posture is too upright for your square-to-square action, it will force you to pick up the putter in an attempt to keep the face from opening. The tendency with this mismatch is to pull the putt. Yank enough of them and you’ll start cutting your putts to keep them online, a correction that imparts sidespin on the ball and significantly increases the chances of developing “lip-rosy.” If you’re starting to endure more than your share of lip-outs, it’s a signal that you need to get back into the state of match by either bending more from your hips, or keeping your upright posture and allowing the putter to open on the backstroke.

If you choose to change your stroke, make sure you do it correctly. Remember, the putterface opens not by conscious manipulation of the hands or arms (the death knell of any stroke), but by naturally moving the putterhead slightly to the inside of the target line during the backstroke. The face will return to square on the forward stroke as it retraces its inside route back to the golf ball.

If your posture is too bent over for your open-to-square stroke, you’ve created a mismatch that will force the putterface open at impact, resulting in a push. If you’re pushing and/or jerking your putts, it’s a sign that your posture and your stroke don’t match. The solution is simple—either straighten up and keep your open-to-square stroke pattern, or stay bent and go square-to-square.

PGA professional and Senior Instruction Editor Dr. T.J. Tomasi is the director of instruction at Lyman Orchards GC in Middlefield, Conn. He’s recognized as one of the top 100 teachers in America.