If you want to become a better putter, you have to know how to use your eyes to your advantage. Why? For the simple reason that putting has everything to do with how the ground is contoured and the speed the ball rolls on it. Full shots and even most short shots launch the ball into the air, but with putting, it’s critical that you inspect the entire surface between the golf ball and the hole. To get a good look, I recommend you look at all your putts, not only from behind the hole, but from a 90-degree angle. The angle behind the hole will help you see the slope from side to side, but from 90 degrees, you’ll get a better idea of the distance and elevation change of your putts.

When I read putts, I usually start at the 90-degree angle and then move back to behind the golf ball. Once I do that, I don’t bother looking at the hole from any other angle, since not only does that slow me down too much, but it tends to overcomplicate things; as a result, I start overthinking it. Try this technique the next time you putt. Pick a 90-degree angle (I usually like looking from the higher side), and then get a good look from behind the ball. I know it will help.

Don’t just look at the hole. Start from the ball and trace the line you want the ball to roll. Then, hold steady on the target and paint a picture in your mind of the ball rolling in!My favorite drills to work on feel for distance have to do with using your eye-hand coordination developed by other activities and sports you’ve played in the past, such as baseball, basketball or bowling, for example.

The next drill will be my Heads-Up Drill, which involves looking up at the hole instead of down at the ball. You want to get the same sense of rolling the ball to the hole with a smooth arm swing rather than the common “hit and hope” stroke syndrome that I sometimes deal with on a daily basis when teaching my students. This drill gets your mind focused on the feel for the distance and on visualizing the line of the putt and your target. Another way to look at it is to think of shooting a free throw. What are your chances of making a free throw if you’re looking at the ball and not the hoop? Practicing your putts while looking at the hole reinforces your ability to better control how far your golf ball rolls with strokes of varying lengths.

Now, to add this drill and exercise on course, while you’re doing your practice strokes before you putt, look up at the hole feeling as if you’re doing the Heads-Up Drill, visualizing and feeling the distance. Commit to the stroke, and execute! Add this to your preshot routine, and you’ll definitely improve your putting.

Now, we’ll use what I call your “mind’s eye” in this next drill. After you’ve figured out the speeds of the green you’re practicing on and you’re consistently rolling the ball close to the hole with your eyes on your target, I want you to look down at the ball and close your eyes. Yes, close your eyes! It may be a little strange in the beginning, but you’ll be surprised at how good you can putt when you’re not worried about the ball or the putterhead. Closing your eyes forces you to use your sense of touch and feel, and frees you from becoming too mechanical in your putting stroke.

It’s even more effective on shorter putts inside 10 feet. Hit putts with your eyes closed and listen for the putt to fall. This helps train yourself to finish your stroke and keep your head and body steady. 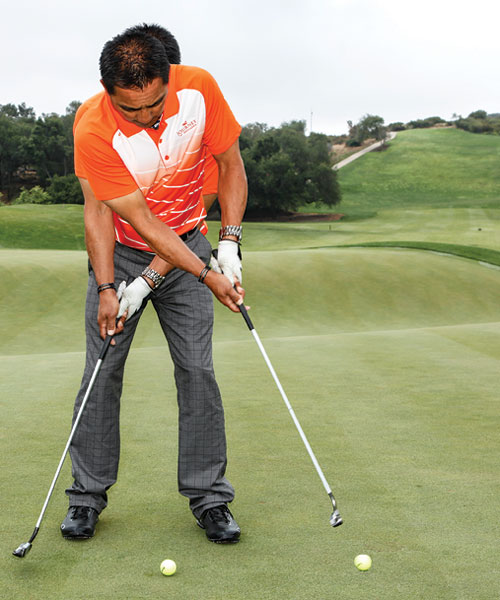 Speaking of tempo, here’s the rub: There’s no one rhythm and tempo that’s right for everyone. Some players prefer a long, slower stroke, while others feel more comfortable making shorter, quicker strokes. The trick is finding which tempo works best for you and sticking with it for putts of all lengths. What that means is, even if you have a quick tempo, you don’t want a backswing and forwardswing that are the same length each time. If you do that, you’ll either have way too fast a tempo for long putts and/or a tempo that’s too slow for short putts. Instead, maintain the same tempo, but let your stroke get longer on long putts and shorter on short putts.

To practice, think of a metronome (or use one if you have one). As you start the stroke, count to 1. At the end of your backswing, count to 2. At impact, count to 3. Once you have a baseline count, allow it to grow, as needed. Maybe your next long putt is a 1, 2, 3 and then 4 at impact pace. Or maybe it’s a short putt at a 1, 2 pace. On longer putts, the putter will accelerate more on the downswing, as long as you follow the beats of your natural tempo. Lastly, make sure your grip pressure remains constant throughout the stroke to ensure that smooth transition between backswing and forwardswing.

While belly putters have dominated the discussion relative to putter lengths these days, there’s actually a wide range of putter lengths that fall within the allowable range. Most putters off the rack are around 35 inches, but who’s to say that’s the right length for all players? Some golfers prefer a shorter putter since it helps them make a more comfortable stroke from over the ball. Some players are taller and like the feeling of being a little higher above the ball.

It’s not just all feel, either. Longer putters tend to be easier to putt on an arc, while shorter putters are easier to swing more down the line. Experiment with varying lengths, and decide which length feels best for you. 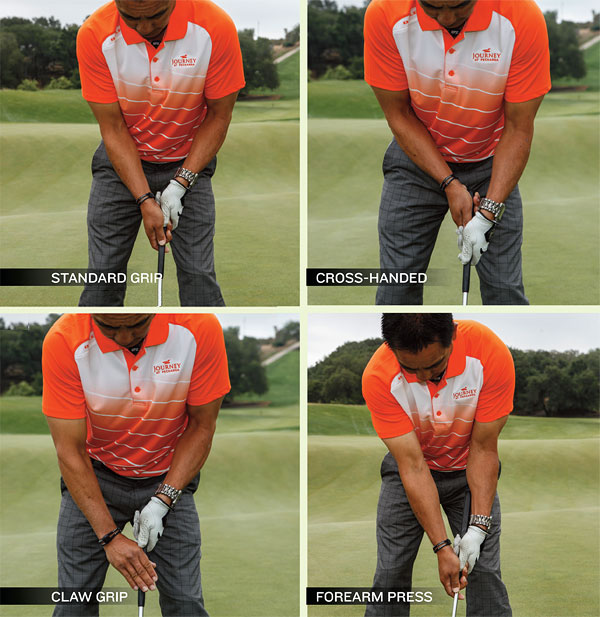 When it comes to how you hold the putter, again, like many aspects of putting, there’s no one right answer for everyone.
The best putter grip is always the one that works best for you. However, certain putting grips tend to have different advantages. The standard putting grip is the most familiar since you hold the putter like any other club, with the left hand acting as an anchor. This kind of familiarization is what makes it a comfortable choice for most golfers. Alternatively, the cross-handed (or “left-hand-low,” as it’s sometimes called) grip promotes a stroke with the right hand anchoring the club. Golfers who use this grip like the feeling of putting with their right hand for more control. 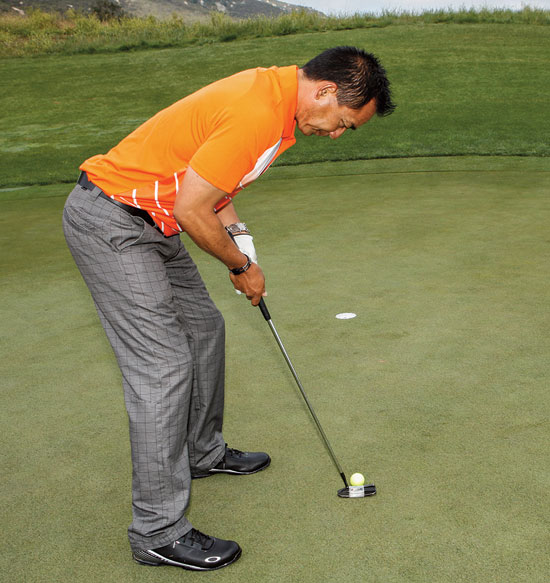 YES!
Like your tempo and grip, there’s a variety of good ways to stand over the ball, as long as you follow a few constants. First, you want to make sure your eyes are over the ball, or at worst, a little inside the targetline. If you’re leaning either too far forward or you’re too upright (see the photo above), you’ll have a tough time routing the putterhead on the proper path.

The second constant is hinging from the waist, which is a must-do. One of the analogies I’ve heard about good posture is to imagine squatting down onto a barstool. That’s terrible advice! If anything, I would get on a barstool like you see in the above photo, and that’s no good! The right way to address the ball is to hinge from the waist, retain some flex in the knees, and stay relaxed.

Try some taller postures, then experiment getting a little lower. Some good players actually adjust based on the lengths of the putt, meaning they get lower over shorter ones. That’s fine, as long as you keep those eyes as close to being directly over the ball as you can. This will help you see the intended line much better than you would otherwise. 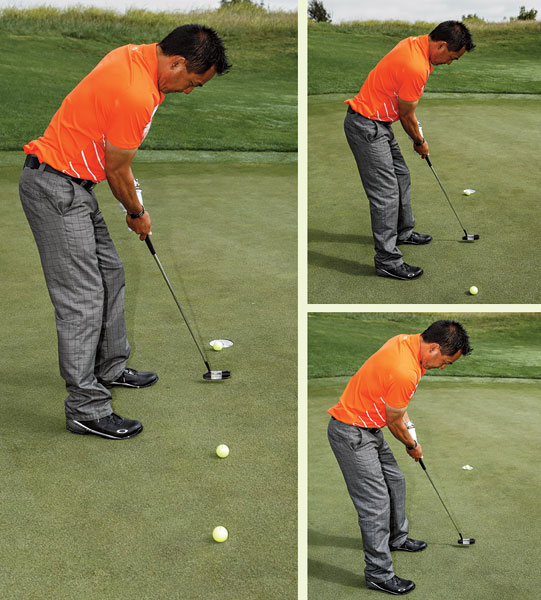 Putting practice can be monotonous, especially if you do it with no goals in mind other than making a few putts. To make practice more interesting and to put on a little playing pressure, practice this simple drill. Align three balls at three lengths, starting with the first a foot or so from the hole. Move the other balls back two to three feet each until you have three in a row. Then, start with the close putt and roll it in. Move to the other putts in order, and try to make all three in a row. If you miss any of them, start over again.

Practice this drill, and tell yourself you can’t stop until you successfully do this drill three times. This kind of added pressure will simulate the pressure you sometimes feel on the course, helping you learn how to better handle and control your emotions on the golf course.

Randy Chang, PGA, is the Director of Instruction at the Journey Golf Academy at Pechanga, the Aloha Academy at Talega and the Back Bay Academy. For information, visit randychangpga.com.