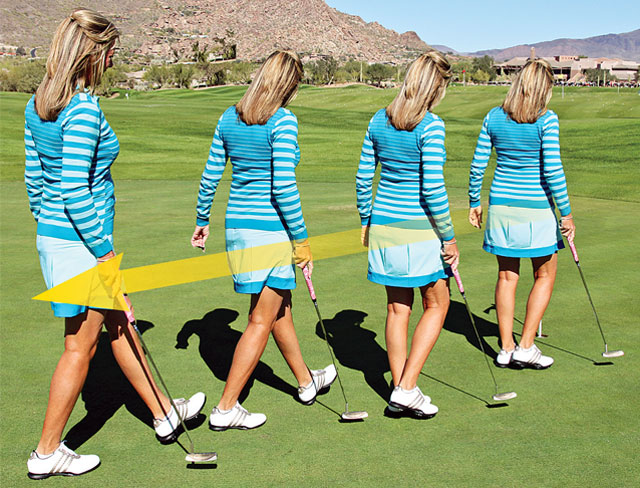 Years ago, I played in the Heather Farr Charity for the Blind tournament in Sun City, Ariz. I played with an English gentleman who had been blind since birth. It was quite fascinating to watch him play, especially when he was preparing to hit a shot. His wife (who some would say was his 15th club) would walk him to the ball and help him set his club to the ball. He would then slide his hand down the shaft of the golf club to feel the distance from the ball. It was an amazing thing to watch, and really opened my eyes to all the tools we as golfers have to improve our feel. There are many senses we often take for granted.

While the Englishman did this routine for all his shots, he did something a little different with his putting that I think is something we all can learn from. I noticed that instead of walking him directly to the golf ball, the Englishman's wife would take him to the hole and let him walk backward toward the direction of his ball for about five or six steps, then proceed to set up to the ball. After about four holes, I asked him why he would walk backward from the hole and what this did for his putting. He explained to me that it allowed him to feel the way the green was sloped close to the hole and he could only feel it when he walked backward as it would move his body as he walked. It was amazing how close he came to the hole with his putts. He shot a 92 that day, much to do with his ability to putt!

I have not only used this method to "see" which way the ball will break to the hole for my own game, but have passed it along to many of my students. The reason why the golfer only needs to walk back about five or six steps from the hole is that the ball is slowing down at this point and will be most affected by the slope of the green then.

The next time out on the putting green, try this little exercise. Stand facing the hole, then walk backward, allowing your body to follow the slope of the green. If you feel yourself going downhill to the right, you'll know that you'll be putting uphill from left to right because you're putting in the opposite direction that you're walking. If you have a tough time seeing or feeling any slope, you can try closing your eyes. You'll begin to notice the subtle breaks and make more putts every time.

Susie Corona, LPGA, is the director of instruction at Terravita Golf and Country Club in Scottsdale, Ariz.

One thought on “Blind Reading”