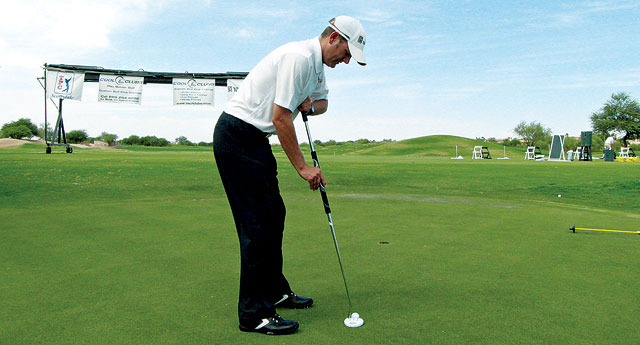 There’s no doubt that Adam Scott’s resurgence to top form with the chest putter and Keegan Bradley’s PGA Championship victory with the belly putter have stirred up more chatter regarding whether or not long-length putters pose an unfair advantage. Should the PGA Tour outlaw these alternate putting styles or let them be? Are they fair or unfair to use?

Maybe the question really is, why do so many golfers opt for a belly or chest putter in the first place? Do they know something we don’t in terms of the advantage a long putter has over a standard-length flatstick? Players who come to mind are Scott, Couples, Singh, Mediate and Els, all of whom have been late adopters of belly or long putters, each with varying degrees of success. And, by the way, not all players who have demonstrated success with long putters are new to using one. Keegan Bradley has been using the belly putter since his college days at St. John’s. With that said, what gives? Why are belly and long putters more popular today than ever?

There are a few reasons why these longer putters work more efficiently than short putters, but the main reason so many players make the switch has little to do with mechanics of a long putter versus that of a regular putter. The reality is that most (not all) of the players on Tour who go to this style of putter do so because they have inherited some form of the yips. A perfect example of this is Bernhard Langer. It’s well documented that Langer’s affliction with this ailment occurred at a young age, and he wouldn’t have had the career he has had without the use of the chest putter.

HOW DO THE YIPS WORK?
This problem afflicts many golfers, and some don’t even know they have it. A putting yip is an uncontrollable, unconscious movement with one hand or both hands, usually occurring just before impact. It has to deal with neuro pathways in the mind, and the resulting effect is a putting stroke that produces uncontrollable results. In other words, having the yips is a lot like putting with a nervous mind. When you’re nervous, you shake and tremble, making it difficult to make a smooth, accelerating stroke through the ball. With the yips, virtually the same thing happens, although sometimes it’s extremely subtle, and the mind isn’t aware of the body making small, nervous-like movements through the stroke. And when it comes to putting, even subtle variations in your putting stroke can make the difference between making and missing any given putt.

When a player goes to an alternative grip such as the claw or pencil grip or to a belly or chest putter, the pathway from the brain to the yip hand is re-created. It’s literally a rewiring of the brain, and in almost every case, the yip goes away–sometimes forever and sometimes just for a few months. Regardless, the player is able to perform better on the greens, thus making more putts and shooting lower scores.

Now, aside from the yips, if you were to evaluate the sheer mechanics of a long or belly-length putter, you’d see that the belly and chest putter simplify the putting stroke. With both methods, the butt of the grip is anchored against your body, thus taking the hinging of the wrists and hands virtually out of play. Also, with no wrist or hand involvement in the stroke, the putter tends to bottom out at a similar point, as well. The result, in most cases, is more consistency and a stroke that, for some, is easy to repeat.

IS IT REALLY AN ADVANTAGE TO USE A BELLY OR A CHEST PUTTER?
For some golfers, absolutely! If you struggle with the yips or making a consistent stroke, then yes, a long-length putter may, in fact, help. But like any other club, a belly or chest putter isn’t right for everyone. Some who have tried belly or chest putters have said distance and speed control are more difficult on short putts, while others have said that longer putters are more difficult to aim. In any case, putting is truly the most individual aspect of playing golf, and choosing the best putter for your game, no matter what length it is, should be your top priority. And as for an unfair advantage, hardly! Every player can use a belly or long putter if he or she wants. There’s nothing unfair about that, and frankly, you can make a similar argument about golfers who use certain drivers, shafts, iron designs, wedges and so forth, all claiming that different characteristics of those clubs have performance benefits over another. The goal, in any case, is to get the ball in the hole in the fewest strokes, so use whatever club you think will get the job done.

If you feel like you might have the yips, the good news is it’s treatable. You just have to identify which hand you have it in and then reformat your grip with that hand on the putter grip. And by the way, this doesn’t always mean switching to a longer putter. Sometimes simple changes in grip positions and stance will help you refresh your putting technique.

John Stahlschmidt, PGA, teaches at the Tour Academy located at the TPC of Scottsdale in Arizona. For more information, email John at johnst@touracademy.com.