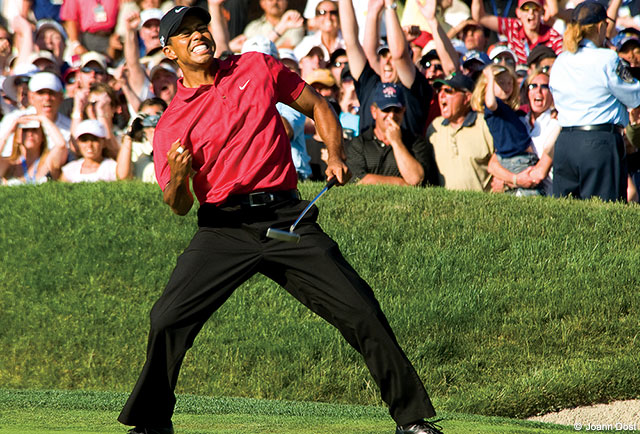 Tiger Woods is 40 years old, and that’s cause for many a golfer to take stock of how he changed the game – how it’s played, taught, learned, how it’s now considered a true sport rather than a staid, stolid, plaid-plagued pastime.

By every measure, his influence has been seismic. He brought millions of new fans to the game, and for more than a decade was the most popular athlete on the planet. He took the reins from the likes of Greg Norman, Nick Faldo and Nick Price – all major winners, stellar tacticians, great thinkers at their best – and added a new dimension of power to the championship-winning equation. Everyone knew he was coming, that he was a star from a young age, that his dad had groomed him to be the best ever, that he ran roughshod through the amateur ranks. Still, he truly took the sport to a new level. When he was at his best, which was most of the time, he not only blew the ball by everybody off the tee; he put mid-iron shots into a thimble, performed awe-inspiring feats from within 50 yards (that chip on No. 16 at the 2005 Masters the most famous example), and, crucially, putted with an assassin’s eye and nerve.

Be like Mike, said the marketing minds at Nike when Mr. Jordan was in his prime, about the same time Mr. Woods came on the pro scene. Well, now Nike had young Eldrick in its stable, too, but they didn’t have to repeat that phrase. We already knew it by heart: We all wanted to be like Tiger. Countless rank-and-file PGA teaching pros evoked his name when giving knowing full well that most mortals could never come close to matching his moves, while millions of kids sporting Swoosh caps and new sets of sticks believed they could. Golf became cool across the spectrum, thousands of courses were built, a healthy new crop of teaching pros came on board and, at the highest level, tournament purses and TV contracts exploded. By the mid-2000s, even middling Tour players were pulling down more bucks in a year than Jack Nicklaus made on the links in his four-decade career. All because of one skinny Cablinasian from Cypress, California.

Now the kid ain’t a kid anymore, and it shows. Sure, 40 is just a number like the one we mark down on our scorecards, but for a guy who’s arguably the greatest player of all time – Nicklaus, it appears, will retain his title as greatest champion – it’s a weighty figure indeed, an undeniable middle-age milepost. In fact, given Tiger’s recent physical setbacks and psychological woes, most would consider him an old 40. At his offseason event in the Bahamas in mid-December, he said as much when asked how he gets his exercise these days.

I walk, he said. Then I walk some more.

No swinging even gently, certainly no legendary range grinding, nothing close to playing a complete round of golf. A full golf bag’s worth of knee, leg and back surgeries will do that to a guy. Happens to all of us, eventually. Body parts fail. But after a decade and a half of unprecedented golf dominance from ages 21 to 35, Tiger’s parts gave out with alarming regularity. His swing, at its core, has always been about extreme torque and stress; through several teachers, from Butch Harmon to Sean Foley to whoever that last dude was, he never lost that familiar and powerful sequence: super-wide backswing, huge weight shift at the top, leg-loading crouch coming down and violent up-thrust at contact. Even an avowed gym rat like Tiger – he remains a true specimen in terms of body fat percentage – couldn’t fend off the effects of such tectonic grinding forever. His left knee took an incredible brunt. The lower back followed. Surgeries laid him low, and that led, sadly, to a clear loss of the supreme confidence and grit that led to 14 professional majors and nearly 80 official wins overall, plus those three straight U.S. Amateurs two decades ago. He played at a physical level that puts him in a league with the greatest football, basketball and tennis players. Boxers, too. Pure, brute athleticism and extreme mental toughness make for a winning cocktail in any sport. And now, at the crest of his fifth decade, more fans and pundits than not believe he’s done. The glass of greatness is finally empty.

I have plenty of first-hand proof to back up that conclusion. Indeed, I’ve seen Tiger at his best and worst, up close, at the same spot on the globe. In June 2008, I followed him for a full week at the U.S. Open on Torrey Pines South as he put together what remains the gutsiest and most impressive major win of his career, on one leg, with a journeyman named Rocco breathing down his neck. Tiger simply willed in that famous, wobbly putt on the 72nd hole to set the stage for a thrilling 18-hole playoff the next day; I stood behind the huge grandstand when it went in, and the place shook like a SoCal quake while, in the scorer’s tent, I watched Mediate shake his head. I knew he’d make it, he sighed, adding a completely apropos expletive before heading off for the media tent. He nearly beat the wounded superstar on Monday, but it wasn’t to be. Tiger dug deep and found his familiar gold.

Fast-forward six and a half years, to Torrey Pines north, Farmers Insurance Open, January 2015, as Tiger – who’d won this event seven times, as recently as 2013, when he also won four other Tour events – attempted to prove he could get past the previous week’s debacle in the desert, where he chunked and skulled his way to an early exit. It was a strange, twisted type of d_©j_Ê vu, watching him walk somewhat gingerly from the practice green to the first tee as the coastal fog just began to lift and the crowd began to swell. He pulled a 3-metal, teed up and blew his opening drive out to the right, on the treeline. He put on a game face, and the fans followed him out onto the course with high hopes, but within a dozen holes he was done, his glutes not firing, his game in ruins. And it didn’t get much better from there. Tiger played in a handful of Tour events through the year, 11 in all, missing four cuts, notching one top 10 and three top 25 finishes – which, incredibly, was an improvement over 2014, when he played in only seven events. He made nary a wave in any major last year, missing the cuts in the final three after tying for 17th at the Masters. He’s now ranked 299th in the world as today’s young guns – Jordan, Jason, Rory and Rickie – have officially, ruthlessly brought a close to the Tiger Age.

But is he completely done? I have my doubts. Yeah, Tiger is beat up and an old 40, but c’mon, he’s Tiger Woods. He’s come back before – from personal trainwrecks, myriad swing changes and, yes, various physical ailments. He can still be a force, just as Nicklaus and Tom Watson have been well into their middle (and even golden) years. He could capture some of the Vijay Singh fortysomething magic, but he has to believe it himself, put the back surgery in the back seat and find a way to the range again. From there, anything is possible.

Perhaps that’s Tiger’s greatest lesson, and the ultimate Golf Tip: Never give up, at any age.

Vic Williams is editor of Golf Tips magazine. Contact him at vwilliams@madavor.com.

2 thoughts on “What Tiger Taught Us”