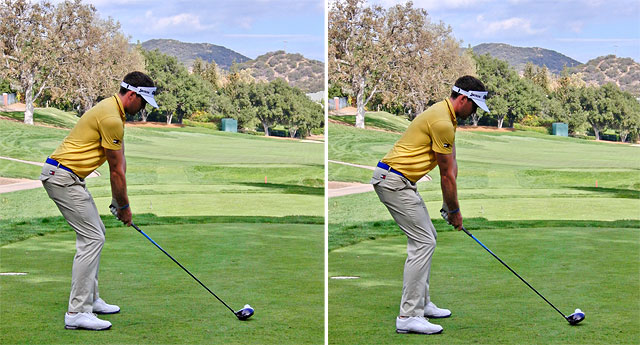 Keegan Bradley, ranked 9th in the world, is one of the best drivers of the golf ball. When he sets up, he’s well balanced, bending from his pelvis with a slight knee flex and his arms hanging straight down from his shoulders. This is a setup position every type of player should try and emulate.

Another reason why Keegan is averaging more than 300 yards per drive is because he takes the club back on an arc inside the target line, which helps his body rotate more effectively. As he continues his backswing, his hips work on a slight angle, with the right hip being higher than the left hip, which helps him maintain his spine angle. As the club reaches the top of his backswing, the left knee gains flex and the right knee loses some flex to maximize torque and use the ground as leverage. In the sequence, notice Keegan’s connection with his left arm to his chest and how his right elbow stays in and tight to his side at the top. That’s the stuff you want for real power!

Once he starts his downswing, Keegan creates a tremendous amount of force by getting his lower body to start the motion down. Keegan then gets his left arm to pull away from his chest, which gets his right arm to extend in front of his chest. As he reaches three-quarters of the way down, the club is approaching the ball on an inside path, and he squares the face by tilting and turning his body through the shot. At impact, his hips are opening to the target, with his shoulders fairly square to give him maximum power.

Another component behind his powerful swing is what Keegan does through the ball. He gets his pelvis to push through the hitting zone and his spine fully extends with a tilt toward the ball. This is what you’ll see all long ball hitters do. His arms and club work on an arc around his body, with his legs extending to have maximum force and leverage. Keegan’s balance through the ball is perfect for finishing on the right toe and left heel.

Only good things will happen from copying Keegan’s swing. Having a solid setup position and keeping a good connection through the swing by maximizing rotation will lead to a full, extended followthrough. Keegan maintains consistency by reproducing body alignments time after time. Get your body to move in the same pattern and direction, and you’ll start developing more power and consistency.

Greg Baresel, PGA, is one of the Chicago area’s top young instructors. To get more information, visit his website at golfwithgreg.com.